There’s a company that’s advertising its bottled water as “the best stuff on Earth.” And it is. People are starting to realize that. There are a whole lot of things that are turning out to be not quite as important as we thought they were, but water is not one of them. People have known that forever. They used to distribute themselves in a reasonable way across the landscape in the olden days. If there was a spot that had water, that’s where they parked their fannies. You’ve got a confluence of rivers, that’s where the cities were.

We’ve got it pretty good around here. We’ve got a big lake up in the foothills and over a hundred years ago some folks had the bright idea of protecting the entire watershed that feeds it, and not building on it or sticking boats on it or pooping near it or anything, and they ran a big pipe from the lake to Portland. Then they dammed up another area downstream and got themselves a new reservoir and between the two of them we’ve got enough water to waste, even with a much bigger population. And it’s delicious. Even the water that goes down the driveway is delicious.

It’s pretty low-tech. Nothing but rain and gravity. No one is allowed to set foot in the hills that drain into the lakes. It’s a big mass of unobstructed green up there. There are some places along the water pipeline where a few unobtrusive chemicals are added just to take care of random bacteria from elk poop but it’s a very simple system. Sensible. This is exactly how people should come together to provide for the common good. Lots of folks think socialism is a dirty word but it’s a lot more efficient than giving everyone a bucket and a gun and wishing them the best of luck.

You’d think we could all agree that water is a resource that should be cherished and protected because none of us can live without it, but no. The very fact that it’s necessary is a lever that can be used to pry up a bunch of money. So companies are diverting public water into petroleum-based containers with a half-life of forever and marking it up by a factor of thousands and successfully selling it to people who actually have access to the same stuff coming out of their own tap. It’s a mystery why they buy it, but they do. 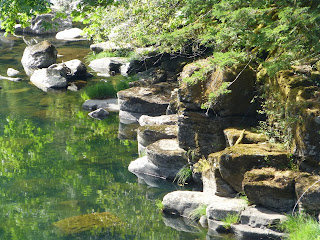 Right here, up the Gorge a ways, they’re talking about giving the Nestle Corporation the rights to some of our super-clean water so they can put it in those bottles and make us pay a ransom for it, and they’re doing it because it will mean fifty people in the small town of Cascade Locks will get jobs. Shoot, we would all agree to jump in a mass grave if it meant we were fully employed digging the sucker first. It makes no sense to privatize a necessity like water, but we give wealthy people a lot of leeway. We even mistake wealth for virtue. If you’ve got enough money, you can buy your own vocabulary and teach it to the masses. You’re not a leech, you’re a job-creator, and even without any evidence, people will believe it.

If you and your friends are rich enough, you can even buy the terms of a new conversation. You can get ordinary working stiffs to believe there is something called a Death Tax, as though you can be taxed when you’re dead, and not your pink, entitled heirs, with their smooth hands, who are the feckless recipients of your slab of cash.

You’re in control of the lexicon. Nobody even talks about “pirates” anymore.