Okay, I’m back from vacation, but I figured I’d be jet-lagged. Here is the final excerpt from my book Miss Delivery: A Postal-Mortem. 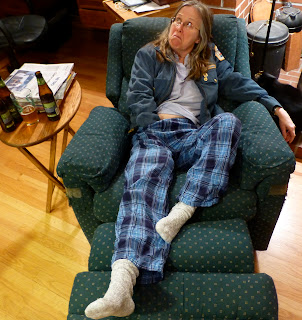 Retired mailmen are thickly distributed all over the
country, but they aren’t all that frightening if you know what they are. They
aren’t decorative, but they aren’t dangerous, either, and they’d be much
obliged if you bought them a beer. They’ll get the next round. Oh? You have to
go so soon?

As a general rule they can be expected to take care of
themselves. The pension is usually adequate for those who have never married,
or never divorced, although that’s a thin cross-section. Low standards of
self-maintenance serve the rest of them well, as long as they’re not inclined
to invest in video poker. The National Association of Letter Carriers, the
union that has always looked after our best interests, has even established a nice
retirement community in Florida specifically for retired letter carriers. There
are five hundred garden-style apartments available, for which there is quite
the waiting list. This is where a lucky few of our finest faded blue are
quarantined from society. Um, sheltered.
Recently, it was reported that a fire broke out in the
development. Thankfully, no one was killed or injured, although a half-dozen or
so retirees were displaced. Officials in the fire bureau, last I checked, have
been unable to determine the origin of the fire. This is surprising to me. I
can see it just as clearly as I have seen my own future.
“Hey Vern,” it starts.
“Hey Herbie. What’s new?”
Herbie and Vern collapse into helpless laughter. Vern is
first to recover.
“So I think I got me a propane leak,” he says.
“Naah. You’d smell it,” Herbie reassures him. Kerm and LeRoy
let themselves in, leaving the door ajar.
“Vern here thinks he’s got a propane leak,” Herbie says. “But
I told him it’d smell.”
“Propane doesn’t smell,” LeRoy informs him. Kerm begs to
differ.
“It does smell,” he insists. “It’s just that it sinks to the
floor and you don’t notice it.” Randy Randy and Cliff filter in through the
open door and are promptly filled in on the disagreement. It has been exactly the
same temperature for ten weeks running, season’s closed at the dog track, and
they’ve all gotten all the juice they could out of betting on the election. Everyone
senses an opportunity to make a wager. Everyone’s perking up.
Randy Randy has a different theory. “Kerm’s almost right. Propane
does smell, but it rises to the ceiling, not the floor, and that’s why you
can’t tell.”
“Floor,” Kerm says.
“Ceiling,” rejoins Randy Randy.
“I got five bucks on Kerm,” Herbie says. Vern demurs. Frank
and Stricky walk in, sniffing money.
“Besides, propane doesn’t even burn,” Herbie asserts.
“Propane burns!” Vern
is exasperated. “Jeez! It’s what’s in my stove!”
Herbie stands pat. “Five bucks on Kerm,” he reiterates. Frank
pipes up.
“I’ll take five of that,” he says, producing a crisp fin.
“You don’t even know what we’re talking about,” Vern points
out. Frank explains, with exaggerated patience, that whatever Herbie is willing
to bet in favor of, he’s willing to bet against. “Herbie has no brain,” Frank
goes on, “and besides, it’s diesel he’s thinking of. Diesel doesn’t burn. You
could drop a match right in a bucket of diesel and nothing would happen.”
“Bullshit,” Stricky says. “Prove it.” Frank goes out to
Vern’s garage and pokes around the cans. Meanwhile, Kerm and Randy Randy have
gone to fetch a ladder to investigate the ceiling-floor controversy. Cliff and
LeRoy agree to volunteer neutral noses. Cliff lies down on the floor, and LeRoy,
teetering on the ladder under the direction of Randy Randy, presses his face
into the ceiling. Neither of them smells anything.
“That doesn’t prove it doesn’t smell,” Vern points out. “I
was just saying I thought I had a
leak, because the tank’s been running out so fast. Let me open up the valve for
a minute.”
Everyone smells something now. “Oh, shit, that’s Kerm. Jesus
Christ, Kermit, put a cork in it,” Vern says.
“Kerm’s a national treasure. Put a tap on Kerm, and we’d
solve the whole energy crisis. I’ll bet you any amount of money Kermit here
could let one rip for fifteen whole seconds, any time you wanted,” Randy Randy proposes.
Wallets fly open. Kerm drops into a crouch and frowns in concentration while
Randy Randy holds his finger up, looks at his watch, and waits for the second
hand to hit straight-up. Frank comes back in with a gas can, wrinkling his
nose. He has also located a nearly empty can of turpentine, which he empties
into Vern’s sink, and begins to decant diesel into it. Vern is incensed.
“Crap, Frank, not on my good sofa! Take that to the dining
room table. Jesus Christ.”
“Go!” Randy
shouts, and Kerm bears down, pacing himself. No one is quite sure, under the
circumstances, if the propane has an odor or not. Vern gives the valve another
half-turn. Frank is ready with his can of diesel. “Are you sure that’s diesel?”
Vern asks. Frank is sure. “But did you get that out of my garage? Because..”
Frank is holding a match against the matchbox. “Prepare to
be amazed,” he exults.
Myself, I would have bet any amount of money retired mailmen
would smolder a long time, but they don’t. They fizzle right out.
By Murr Brewster|2021-11-09T21:05:04-08:00January 23, 2013|Uncategorized|26 Comments