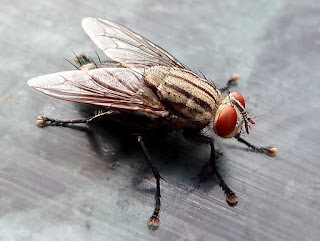 The other day I tried imagining I was a fly, and I was reasonably successful, but that was because I didn’t read up on them first. They have some admirable qualities but the whole package is kind of a deal-breaker. There are lots of kinds of flies, but I was thinking of the house fly, as distinguished from the, um, field fly. They seem sort of tidy and delicate. They have that reputation of being dirty because they land in stuff we don’t approve of and track it in on their feet, but their feet are so little. It hardly seems they could bring in enough of a bacterial quorum to whomp up a good disease.  I guess they do, though, from time to time.

And they have that cute little mouth doodad. No nasty teeth or anything. It’s just a little wand with a sponge on the end of it, and they dab it into their food. How bad could that be? Well, turns out they can’t eat solid food, so if they want to get anything down, they have to soften it up by spitting or vomiting on it first.  I do not know if poop is soft enough that they don’t need to throw up on it, but I certainly would.

Each female house fly shoots out about five hundred eggs in a lifetime, which is pretty good considering they only live two to four weeks. They lay them in batches of seventy-five or so. They only mate one time and then they store the sperm, because they don’t really have a concept of “funky.” Female house flies, it is interesting to note, can be told from male house flies because there’s a lot more space between their eyes. The males’ eyes are practically touching. Which invites, it seems to me, speculation about their intellect. 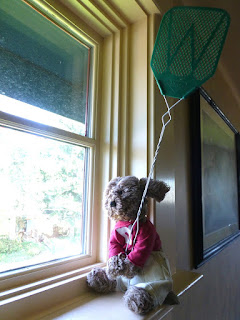 The eggs are laid somewhere moist where the ensuing maggots will have plenty to eat. Mud or poop does nicely, and so does a recently deceased animal, or a living sheep butt. I know about the sheep butt because that’s where I once saw one of my most memorable patches of maggots. Our friend Scott’s sheep, Einstein, presented one day with a thoroughly revolting condition in the uh-oh region, and it required a regimen of care that would turn any rancher into a tomato farmer. I couldn’t even wear wool for a long time.

An article I read said the main problems with house flies are that they spread disease on their tiny feet and they’re annoying. I find the second complaint a little precious. After all, the reason house flies have been associated with people for so long is that we are an excellent source of poop and garbage, so who’s judging? But it is true: for something that does not bite us, they’re pretty annoying. Even the winter ones (some do hibernate in lieu of dropping dead), which are so slow and logy you could swat them with an on-line newspaper, are annoying. And all they do is buzz dully and fly hither and yon to no purpose and aspire to light while pointlessly banging around on the windowsill.

I think they remind us of us.