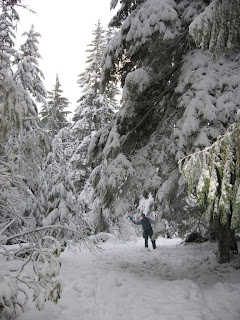 By tradition, we like to spend New Year’s Eve with our best friends, who live sixty miles south of us now. This year we thought it would be right festive to rendezvous at our little Forest Service cabin on the slope of Mt. Hood, an hour away. It’s at relatively low elevation and doesn’t usually get a heap of unmanageable precipitation, but what with all the cow flatulence and car flatulence over the last century, our weather has come up with some fresh ideas. We thought it was best to phone ahead and see how much snow we’d have to slog through before committing ourselves. Great news! The roads were plowed, even our forest service road had had some recent acquaintance with a front-end loader, and our informant guessed we had about six inches of snow on the ground. All systems were Go.

We arrived first and got right up to the beginning of our long driveway, and that was that. There were six inches of snow on the ground, but you had to dig down three or four feet to get to them. Dave commenced shoveling out enough of the driveway to accommodate two pickup trucks, ours and a good one, and I stomped my way to the cabin with provisions. I made a mental note to buy a sled and tow rope, just as I did the last time, but my mental notes are Post-Its in the wind. Every third step or so was crotch deep 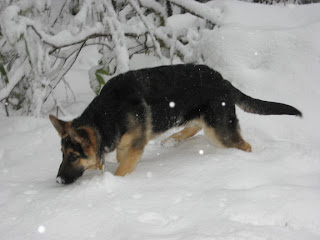 . It was astoundingly laborious. Fortunately, I had unearthed a snow suit from my closet that hadn’t seen service since the eighties. It was rad. The pants were pleated in the front and the jacket had shoulder pads and nothing, at this moment, ever looked finer. We brought three full-size coolers full of food plus a case of beer. Our friends arrived with a matching contribution, plus a case of wine, plus a just-in-case case of wine. (We planned to stay two days, and we are not dainty.) They also brought their German Shepherd puppy, Bear. Guess what he did in the woods?

We were nearly two hours getting everything into the cabin, and we built a fire in the woodstove. (By tradition, there’s a power failure, but the electricity came on, so we had to postpone that a day–a memorable evening of candlelight, salami, a nice Cabernet and Jiffy Pop. 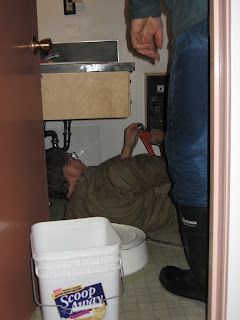 ) Then it was time to turn the water on. By tradition, there is some kind of plumbing disaster, sometimes ghastly enough to send us back home whimpering, so this was a tense moment. We did have to drag out the hair dryer on a long cord and apply it to the spigot, but quite soon the ice chunks began to rattle and the pipes to gurgle and all was well with the world. K. and I had taken up positions in the bathroom to monitor the progress, and sure enough the water was running in the sink there too; we could hardly believe our good fortune, so K. got down on her hands and knees just to make sure nothing was spraying out underneath. That would be the precise point at which the incoming flow blasted out the valve and nailed her with a jet of water with the force of a light saber, pinning her against the far wall like an insect. Dave didn’t correctly interpret the bloodcurdling scream so it took another minute to get the water turned off. He and S. spent the next half hour sealing off the cold water tap. That would be by tradition, too.

The woodstove had only gotten the place up to thirty-five degrees, but with all the hauling and what-not it seemed downright balmy to those of us who hadn’t been cut nearly in two with a spear of ice water. We filled up the fridge and chiseled out an auxiliary one in the snow outside the front door for the remainder: a cow’s tongue, a corned beef brisket, cabbage, bread, ice cream, fruit, potatoes, peppers, pie, cheese, mushrooms, cookies, filberts, pistachios, chips, artichoke dip, pepper bacon, waffle mix, berries, candy, and a stack of butter. The stove continued to crank and the baseboard did its feeble best, and in six hours, we were all just as comfortable as we would have been if we’d never left home. As evening fell, we peered out the window, plump and snug as marmots in a den, contemplating how to put a shine on our winter coats. We started with the brisket.

The four of us reemerged Friday, thicker and glossier, and pawed our way out to the highway. It was sunny, snowy, and rainy, and floods and mudslides were romping all over the road. I blame the cows, and everybody’s car but mine.