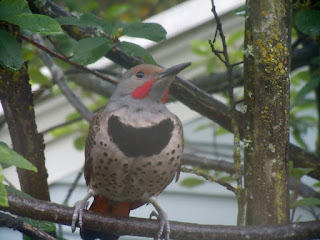 It’s a cascara tree. No human planted it. It was a gift from a bird who gave a shit, but not about property lines. When Dave put up a fence between our house and the next, he put it up as close to the tree as he could. Even with that, later, we realized we’d stolen some two feet from the neighbor’s yard to accommodate the tree. So we had to buy the neighbor’s house.

Cascaras are native here, which is good. That means birds will like it, and insects will live in it, which means the birds will like it even more. I didn’t think it was that attractive, at first. Kind of dull. But that was before I started writing, and before we designated the room closest to the tree as a writing room, and before I had a chance to appreciate the birds that appreciated the tree. Now I do. I count on them. The tree is up past the second story and that means its branches are right outside my writing-room window. It shouldn’t have gotten much taller than that, but it did, because it’s in shadow and yearned for the sun I suppose, and we had to whack off the topmost branches because they shaded our solar panels. 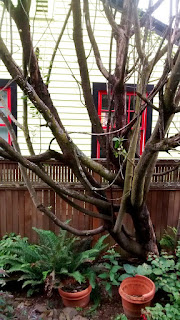 That was a few years ago. The tree hasn’t done well since. It could be the coppicing, but it’s old for a cascara, and maybe it was doomed already. Most of it is flat-out dead. It’s a weird tree. New parts keep springing out of the old so that there are viable branches going vertically out of the dead stuff. It looks like a huge, unruly menorah. I don’t know how long it hopes to keep this up, but already the leafy shade our birdhouse birds might be relying on is gone. There are just a few cowlicks of leaves left.

So what you ordinarily do when a tree is dying on your little city lot is you take it down and replace it. That’s understood. You tell all the shrubs that it just went to live in the country, but that’s not what really happens.

I dithered about it. I need that tree. My window is on the second floor. You can’t just swap a big tree out that fast. If I didn’t have my birds to look at, I’d just be staring at a blank computer screen, and that tends to panic writers. 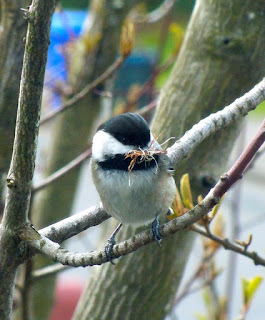 Then my birds caught wind of the plans and started piping up. They pecked at the dead parts and pulled out little grubby snacks. They grabbed seeds from the feeder and stashed them in the flaky bark. They loved it. TERRIFIC, said the chickadees. Yeah? Okay.

The bushtits lined up on a branch together. SOME TWIG, they spelled out.

Hey. I know this story. This is the story where you think everything’s going great and then you lose your very best spider, and it’s horribly sad. I was morose for days. 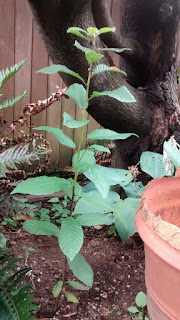 Then I was weeding a patch beneath the unruly menorah tree and saw them. Remember? That’s not the end of the story after all! There, in an empty pot at the base of the cascara, were two friendly little cascara seedlings, six inches tall. I can plant them next to the dying tree and maybe they’ll grow up right alongside! They said they’re willing to give it a go.