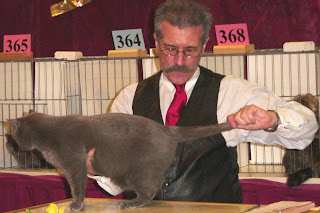 My niece, Elizabeth, was the last person to take Dave to a cat show, and I understand she spent the whole time trying to put distance between them. Among other transgressions Elizabeth reported, Dave had been especially attentive when an exhibitor proudly showed off her Sphynx cats–a thin, hairless, wrinkly variety. “Mmm,” he purred, leaning in. “They look delicious.”

Later at a display for a feral cat sanctuary, Dave had expressed interest in helping with the annual round-up, at which the cats were herded to a location where their health issues could be addressed and adoptions could be negotiated. Dave enthusiastically touted his expertise with a rope and brand, but admitted he preferred to work on his own, because he didn’t like to be around a lot of cat people. Elizabeth has nothing further to report beyond this, because she was too busy backing away. But Dave himself says the woman was entirely unfazed, and offered to invite him for a private herding and grooming session. She even followed up with a post card.

This says a lot about Dave, and also a lot about cat people. Cat people are so besotted with their charges that they are incapable of even registering an unkindness said about them. And Dave is never more easily entertained than when he can locate a loose string on a complete stranger and yank on it. (He used to get punched a lot.) At the cat show, it appears that Dave had free rein to yank strings all day long. Elizabeth emphatically declined to accompany him this year. So it was my turn to take Dave to the cat show. I’d never been to one.

Here’s what a cat show is: upwards of three hundred people who own very special cats box them up, along with their litter pans, and set them on long tables. Then they sit in front of their boxed kitties and eat giant 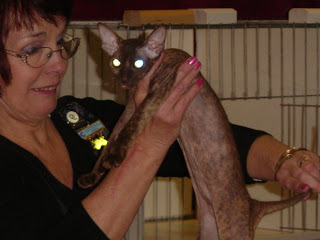 portions of greasy food. In order to look at the kitties you need to peer over someone’s lap through a pall of nachos and French fries. The atmosphere is fun, friendly, and fairly fragrant.

There isn’t a normal cat in the group. Some of them are flat-out bunnies. There are little leopards and tiny tigers, there are dust mops, there are the aforementioned hairless, wrinkly Sphynxes, and then there are my favorites, the Abyssinians: thin, tubular types that are clearly in the weasel family.

Periodically the cats are unboxed and submitted to poking and prodding by a judge. I’m not privy to what exactly goes on here, but one category seems to be feline elasticity, tested by stretching the cat out in mid-air (Abyssinians being hands-down the stretchiest); and there is the all-important bunghole exam, in which the judge lifts each cat’s tail briefly and inspects underneath. He or she then marks down some notes. My suspicion is that the bunghole test is strictly pass/fail. 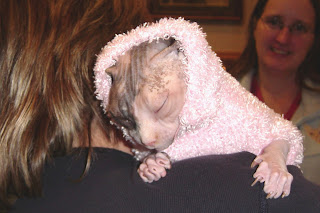 Following Elizabeth’s advice, I made fairly quick rounds of the exhibits, not pausing quite long enough for Dave to engage with anybody, but he insisted on visiting his delicious friends, the Sphynxes. So we located that quadrant, and requested that one or two be hauled out for a photograph. The proud owners happily obliged, and just when Dave was beginning to make yummy noises, an exhibitor retrieved a sweater for her quivering cat and bundled it against the chill. It looked familiar somehow, that little bald wrinkled head poking out of a soft pink sheath, but Dave was no longer interested in eating it.