Cats Just Want To Have Fun 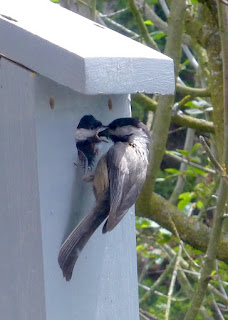 When I was a kid, I found a baby robin on the ground. I got the standard rescue equipment: a shoebox, some Kleenex, and a worm to be named later. Then I went to look for the worm in our compost pile. We had a compost pile because Dad was a liberal.

But I was squeamish about worms. I gripped it best I could and dangled it over the gaping chick, but the worm veered away at the last moment and I freaked out and dropped it and it went squirming around the little bird’s feathers and I ran off with the willies. I don’t remember if anyone intervened but I suspect the rehab effort resulted in a backyard burial.

What did I know? I know I thought one big worm would be quite enough for a little bird, but that’s not actually true. I know this because of our chickadees Marge and Studley Windowson, and because of my friend Julie Zickefoose, who keeps getting wheedled into taking care of baby birds because she knows how. If you’re going to make an entire bird out of the little goober that emerges from the shell, and fast, you need to really shovel in the groceries. Julie reports that your basic baby bird needs to be fed every half hour all day long for weeks, which is quite the imposition on an adult human with other stuff to do. Marge and Studley, who are likely to have four babies going at once, are bombing into the nest box every other minute with bugs, all of which they had to find themselves. It’s exhausting. The year the weather went all wonky and the bugs were scarce, both of the Windowsons looked like shit. They ran themselves skinny.

It’s a really big production. Months. Even before you get the eggs going, there’s this elaborate nest to make out of grasses and stuff all woven together perfectly without using any fingers. That takes weeks. There’s a little cup in the middle of it that has fluffy material like fur worked in special, so as to be cozy. Then come the eggs and the incubation period, during which Studley has to find double the usual amount of food to feed himself and Marge, and then the truly heroic business of cramming bugs into the chilluns all day long. Every year, I am immensely proud of them.

Marge and Studley are Dave’s particular favorite little buddies. Well, and everyone who looks like Marge and Studley, which is basically all of the chickadees. He it was who built the nest box for them. We have had our pets–three, including two happy cats who have been advised they are invasive species, and are not allowed to stalk birds. The chickadees are the closest wild items that might qualify as Dave’s pets. He loves them. 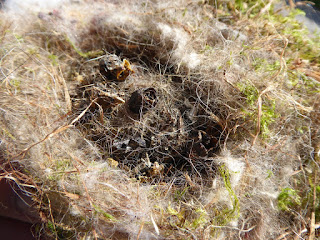 This year everything was right on schedule. The nest was started in early April, incubation a few weeks after that, and then, in mid-May, both Marge and Studley were flying in and out of the box. I opened my window in case I could hear peeping, but I couldn’t. It takes a few days for it to become audible from my window. And then, that soon, activity ceased. I never saw both Marge and Studley at the same time. Finally Marge, or possibly Studley, flew to the nest box with a caterpillar, looked inside, hopped in, and hopped out again a minute later, still with the caterpillar. And flew away, and never came back.

When the flies showed up, I had Dave take the box down and we looked inside. The nest was perfect. You could still see the cup with the fuzz around it, almost in pristine condition, because nobody got big enough to stomp it down. There were four tiny desiccated bodies.

My birder friend Max said this is what happens when one of the parents dies.

I have two neighbors whose cats roam my yard. The cats’ names are Anjali and Sid. Like Marge and Studley, they get to have names because someone cares about them. Personally. Both neighbors know how I feel about outdoor cats. They’re both apologetic. I’d even gotten an email from one of them when she decided to start letting her cat out. “I can’t keep Anjali in anymore,” she said. “She wants to be outside so badly. But let me know if there’s anything I can do to keep her from hurting your birds. Anything.”

“You could put a CatBib on her,” I said. I’d even bought a dozen to give away. “It’s highly effective. It doesn’t keep them from moving or climbing, or shitting in my tomato patch, but it interferes with that last pounce when they’re hunting.”

“Oh, that thing looks weird. I would never hang that on her collar,” she said.

“Or you could give her one of these wide, bright collars to wear. It’s not quite as effective, but it makes it a lot easier for the birds to spot them,” I said.

“Oh, no, I couldn’t make her wear that. It’s so undignified.” 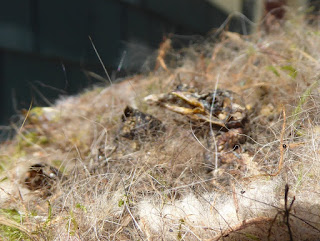 Not long after, I found the tag and collar of the other woman’s cat. Sid. It was directly underneath my bird feeder. The chickadees in particular like to take their seeds to the low branches of the nearby azalea. I returned the collar to the owner. She looked remorseful, and yet, somehow, helpless.

I don’t have four new chickadees. Sid doesn’t have his collar. But he and Anjali have their entertainment. And their dignity. And maybe they have Marge, too.

This is personal, now.