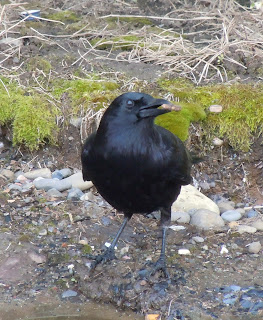 It’s spring, according to the birds, although otherwise it’s hard to tell it from the previous four months of damp and drear. And that means we’re getting ready for nest-building, and drowned peonies, and the annual ant infestation; and people will tell each other earnestly that they really didn’t mind the cold all winter but this is just ridiculous, and some people will be moved to open a vein just to see some color. And soon our dominant crow population will undergo its seasonal Tourette’s. I’m a fan of crows. They’re sleek and smart and they don’t skitter at all when you walk by, just adjust their swagger to throw you the stink-eye over their shoulder. They even use tools, such as our friend Bob Smith, who will crack their walnuts if they bring him one, and they’re particularly impressive when attending a platter of possum in the middle of the road. They’ll eye that Buick coming up the pike and they’ll calculate the angle of compaction and they’ll hop two inches to one side and let the Buick tenderize the possum, and then they’re right back on it. Crows have a long association with humans and many have picked up odd jobs as spirit companions. I talk too much to attract a spirit companion, but would be happy to audition a crow as a sidekick. Except for the seasonal Tourette’s, which gets on my nerves. 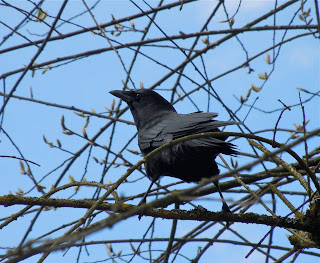 It’s just like when a new family moves in down the way and you can’t figure out where they’re from, but they’re not from around here; and all you know is that they’re diverse and need embracing, but the best you can do is smile, because they just say “ock ock” and smile back, and all is well for a while. But they’re always cooking something that smells sour and weird and drifts through the air, and then they start accumulating car parts in the back yard and sofas on the porch and before you know it there are thirty of them in there, and they keep the windows open and the weird smell comes out and all thirty of them are yelling “ock ock” all day and all night, and you’re a big liberal and can’t figure out any way of communicating nicely that we don’t “ock” in the middle of the night in this country, and your face hurts from smiling in an inauthentic but embracing manner while you are actually thinking that your fellow shotgun-wielding countrymen might have more economy in their reasoning than you’d given them credit for. It’s like that with the crows, when they’re having their seasonal Tourette’s. 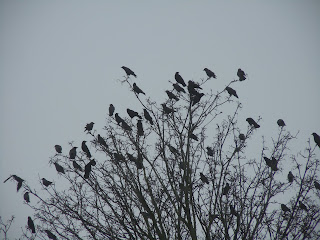 Crows vocalize in a number of ways, most of them raucous, but I don’t mind. It suits them. They are even able to mimic human speech if they’ve got the notion. Sometimes they all yammer away when they’re gathering in a tree or taking off again, and then they settle down. But once a year they all go off at once and all day long for weeks on end, and it’s just like listening to O’Reilly when he’s got some poor academic on the show who thought he might be able to slide a point in edgewise–you know they aren’t listening to each other. If they were mimicking people it would be all hey hey hey hey dude dude hey hey hey hey hey. Might as well teach trees to bark. I swear.