I was picking blueberries in my garden the other day and trying to stay out of the way of the painters when an unmistakable odor-finger pointed my way. “Smells like something died around here,” I said, which made all the painters point at each other in accusation. I get that. I don’t know how it is in the white-collar world, but back in the post office we always maintained a selection of people who could be counted on to make dramatic olfactory statements.

“No, I mean it smells like something really died around here,” I said. “Something big.” A moose, maybe. I poked around a little, more curious than eager. Dave came along and put in a better effort, snooting around under the larger shrubs. Nothing.

Later in the day I passed by a different corner of the yard and suddenly knew, with every appalled cell in my body, that I was within three feet of the item. My nose grew eyes and went blind. My nose sprouted legs and chewed one off. I crouched down and gave the radius a cursory glance and fetched Dave. He waded into the shrubbery and swept things aside with a big stick, then stopped and leaned over. 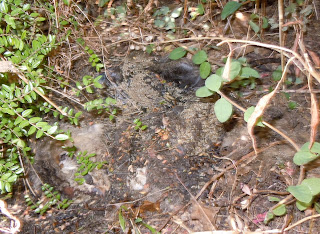 Dave made an unidentifiable sound, all vowels and revulsion. “I’m going to need a flat shovel, a garbage bag, and a bucket,” he said.

“What kind of bucket?”

The bucket was for his personal use, and a five-gallon one, he thought, should about do it.

Raccoon or possum is always a possibility, but domestic cat also seemed likely. We’re overblessed with them here, courtesy most of our fine neighbors. Frankly, I’d be okay with the idea of having one fewer. I love cats, but in their place–that place being inside, stalking the wily moth, or between my lap and a good book. One of my neighbors was missing a cat and asked if I’d seen her just the other day. I hadn’t. I listened to the description, but it didn’t sound familiar. All of those subsidized killing machines look the same to me with a warbler stuffed in their front ends. I said I’d keep an eye out and refrained from my outdoor-cat rant. I’m at the age where it would be too easy to become the neighborhood crank, and you never know when you’re going to need an egg. 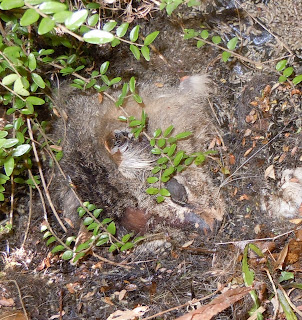 “I don’t know.” Dave motioned me into the bushes and held some branches away with a stick. We both bent over to get closer. Well! It was a wallet. A giant tailed wallet with a paste of maggots on top. The only sound was the low hum of maggot nummy-noises and the gentle plink of our eyebrows falling out. Just before we ran for the bucket, we caught a glimpse of a flat grey tabby head on one end of the wallet. I contemplated calling up my neighbor.

Found a cat. What did your cat look like again? Oh. Okay then. No, this one is about an inch high all over, semi-liquid, with one fuzzy eyeball and a maggot crust. I’ll keep looking. 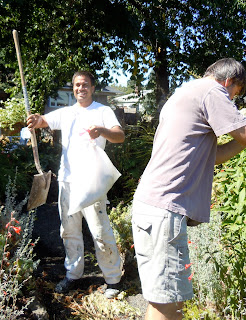 In humans, the stages between Dust and Dust are adolescence, heavy drinking, credit card debt, denial, anger, bargaining, heavy drinking, acceptance, death, bloat, putrefaction, and compost. This cat was in the putrefaction stage, characterized by the release of various chemicals that certain animals that I do not wish to be reincarnated as find attractive. It’s all part of a process that begins at the moment of death when one’s cells, which one had been propping up more or less continuously while alive, begin to slump and stagger. Bacteria are key instigators, and the odors of cadaverine and putrescine are caused by their excretions. That’s what the stink of death is: bacteria farts. True, it doesn’t seem possible that bacteria could do all that, what with their butts being so very tiny and all, but there are a lot of them. If enough folks get together, they can raise quite a stink. Like at the post office the day someone brought in the elk jerky. Or the Tea Party: very similar deal.

Then the flies come in and have themselves a time and lay eggs in the dead thing so their children won’t go hungry. They wouldn’t have to do this if they had breasts, but they don’t. The maggots hatch right on top of their own breakfast, and they look enthusiastic. These were partying like there was no tomorrow, and I can’t blame them. They don’t have much to look forward to as adult flies: eat shit and die.

It’s all very interesting, but Dave and I backed away from it. Dave was fresh off the revelation that he could pay someone else to do stuff, and he went off to search for a critter gitter. That’s when the head painter guy popped up and said he’d be happy to scoop it for us. The head painter guy is the same one who strapped himself to our steeply sloping tower roof to paint our cupola. He’s a cheerful fellow. He said it wasn’t dangerous at all once his skin had baked onto the roof shingles. The boy ain’t right. So, smiling through his t-shirt, he bagged up the critter and deposited it in our garbage can, due to be picked up the following morning. It didn’t cost us a thing.

If you don’t count the fifty-dollar tip for the garbage man.