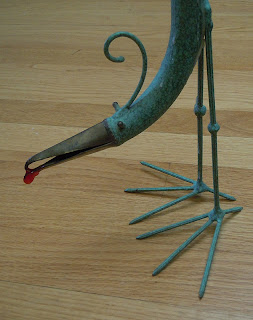 Hey, I never told you all about last Thanksgiving. It was something. I can reveal that it was Dave, in the kitchen, with the candlestick holder, but I don’t have a clue how exactly it went down. I will say this: you just never know what you’re capable of until some big man encourages you to try something new. Encourages, yells at the top of his lungs, whatever.

The candlestick holder was a beaut. It was a little metal sculpture of some kind of shorebird with long leggedy legs and a big beakity beak. I picked it up when we were cleaning out my sister’s house and claimed it for my own. “I love this,” I told Dave.

“I’m not surprised,” he said. “You loved it when you bought it for her in the first place, twenty years ago.” Oh. 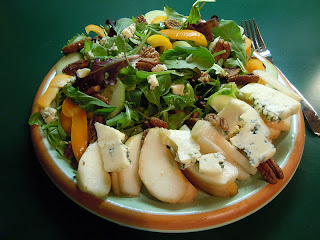 Anyway, I thought I’d put it on the table when I was setting it last Thanksgiving so my sister could join us, in a way. We had a good dozen people coming, and Dave was in charge of the turkey, the stuffing, the smashed potatoes, the carrots, the prawns in tarragon-mustard cream sauce, the pear-pecan-bleu-cheese salad, the root vegetable medley, and the cranberry sauce, while I had to set the table. I get distracted. Once I decided to put the candlestick holder on the table, I was having trouble getting the candle to stay in it. Sensing that Dave had a spare twenty seconds before his sauce burned and his potatoes boiled away and his prawns needed flipping, I handed it to him. A minute later, he made a noise of disgruntlement–not a loud noise, but the kind of noise he makes when I’ve forgotten to put any forks on the table. He can be fussy. I went in the kitchen to find out where I’d fallen down this time.

There he was with the candlestick holder hanging out of his hand. He’d been good and beaked. Blood was fountaining out in every direction. The bird was still in mid-stab and dangling from the back of his hand. I jumped into action. Don’t praise me; anyone coming in on that scene would have planted her foot in Dave’s torso and grabbed hold of the wayward heron and yanked. That’s when the yelling started. This particular shorebird had suffered a fall and a nose-blunting earlier in its career, and the sharp pointy ends of its beak had curled into a fishhook shape, and required a more careful extraction from Dave’s hand meat, which he accomplished himself once I’d been shooed away. Now we were left with a soiled bird and an enthusiastically bleeding wound. “Sew me up,” Dave said.

The wound had exposed eighteen layers of tissue and a gaping ravine of muscle with a row of little alien teeth winking away at the bottom, which you could just make out between blood gobbets. “No! I’ve got butterfly bandaids. Hang on a minute.” The butterfly bandaids got no purchase. It was like damming Niagara with Kleenex. The butterflies flapped wings with every arterial spurt. Dave pinched the chasm together with his fingers. “Just sew me up,” he enunciated.

“I can’t go to the emergency room. My potatoes are boiling. You’ve got a needle. You’ve got thread. You know how to sew. Just sew me the flick up,” he said, or something a lot like it. I hate that tone of voice. But I went for my needle and thread. I can’t help myself. I’m a softie. I’ve just never been able to say no to a large irritated man with a bunch of kitchen knives. 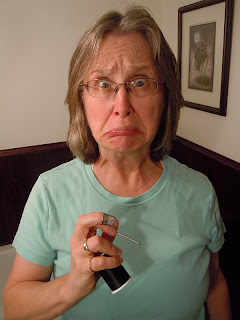 I walked back to the kitchen with an other-worldly, Marie-Antoinette-at-the-Bastille sort of inevitability, distracting myself with details. I do know how to sew. I’ve never had any stitches in me and didn’t have much of a plan, but I thought maybe I’d try a nice French seam, with the overlapped layers and double row of stitches such as I might use on the inseam of a sturdy pair of jeans. That should hold it. I threaded my needle, put a nice knot in my thread, gobbed it up with Neosporin and gave it a go. The needle refused to penetrate the skin. “Hang on, I’m going to need a thimble,” I said out loud, or pilot holes, to myself, and went to fetch it. I came back with a thimble and a smaller needle, and managed a neat puncture on one side of the gash, but it was too close to the edge, and my seam shredded as I pulled the thread through. Shit, I’m going to need a serger to bind these edges, I thought, but decided to make a less tidy job of it and put the needle further back from the gash the second time. It was a delicate operation. Punching through required the thimble and a lot of pressure, and I had to let up as soon as it punched through so I didn’t go clear through his hand. Then up through the other side from underneath, then back down, and so on, a ragged running stitch, and I cinched the gap shut by pulling on the thread, but not enough to produce gathers. Another knot to finish, and a rinse and a bandage, and we were good to go, Dave to take care of getting dinner on and me to throw up as quietly as possible. I don’t know who got the forks on the table. The cream sauce seemed extra zesty. 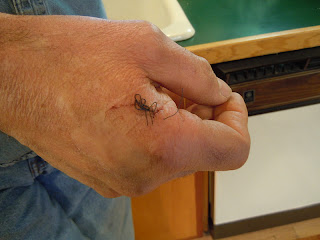 I spend a sleepless night listening for the tiny munching of flesh-eating bacteria or the distant cellular rumble of gangrene, but by morning the wound looked pretty good, and in a few days we managed to pluck the thread out. “Of course, real surgeons do one stitch at a time and tie it off,” Dave said. Oh yeah. “And they have a curved needle so you don’t go all the way through the hand.” That I didn’t know. That would have helped. It occurs to me that duct tape would have helped, too. Dave and I both have ugly hands to begin with, and that also helped.

There are lots of lessons here. Foremost: if you want Thanksgiving dinner to go smoothly, and you think you’re likely to outlive your sister, linens are always a good gift choice.