A Collection of Old Farts 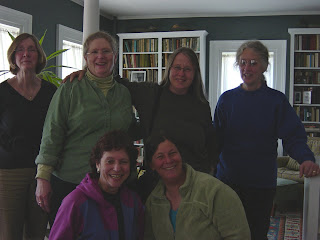 When I was a young woman, I loved to travel by air. I’d take a window seat, tell extravagant fibs to my neighbor, and gaze out at the planet sprawling below, the horizon unfurling like a life full of possibility. I was usually in an expansive mood, the sort you get when your future is larger than your past, you’re in love again, and you’ve been served a free steak dinner with your own personal bottle of Mateus wine.

I don’t much care to fly anymore. Passengers are excreted through a tube from the airport into the plane, where seats have been added and oxygen removed. Someone churns down the aisle to fling out a soda pop and a tiny pouch of kibble. I contemplated the deterioration of airline service on a recent trip to New York, while pinioned between between my seatmates, Elbows and Snot-Snorker. The occasion for the trip: a small group of us was getting together for the first time since high school, forty years ago. This was a group lassoed quite recently courtesy of Facebook, the social networking site that every single person my age has joined in the last three months.

I had tried to find the whereabouts of this old gang of mine before, using modern technology. I Googled away without much success. Take Charlie, for instance. Google Charlie and all you get is a diagram of a box with wires and numbers and squiggly lines sticking out of it, a diagram that Charlie is apparently responsible for, but there wasn’t much I could make of it. Charlie had been very smart and very quiet. Perhaps, I thought darkly, he was the Unabomber.

Charlie and Penny had married each other, so that was a two-fer, and they graciously consented to be invaded and have their refrigerator plundered by the rest of us: Janice, Melissa, Bev, Charity, Turner and me. Any twenty-year-old might have mistaken us at once for a collection of old farts, but our eyes are sharper. We immediately set to gabbling like…well. Like unusually attractive older geese. We’d been stretched out across the country and across the decades. The distance was erased by car and jet, but the years snapped back at once, as though on an elastic band. Sproingg! It was nearly audible, as our eyes gathered each other in and located our true selves. Turner and C 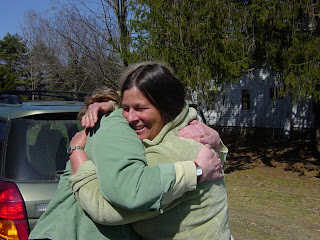 harlie ably, and decoratively, represented the male cohort of the old gang. Some things had changed. Charlie was not only not in the mail bomb business, but was talkative and fond of kittens. The rest of us had traded the exuberance and earnestness of youth for something based more on experience and less on conjecture, and we hooted and reminisced and toasted our dead and caught each other up, time-rumpled and wry.

Penny dropped me off happy at the airport for my return trip, where I arrived at the gate an hour early, and fifty minutes before they announced they weren’t actually planning to take off at all. I was re-booked for the next day and sulked off to a stale room at the Best Western, trudging across the street for “dinner” at Wings ‘N’ Rings. I gave myself over to a dubious cheeseburger and an imitation microbrew-flavored Budweiser, neither of which ordinarily produces an expansive mood, but I had much to ponder, and was still pondering the next day at 35,000 feet, wedged in among my seatmates Sneezy, Onions and Drummer-Boy. Friendship expands, and airline service contracts, and time, I think, can go either way.