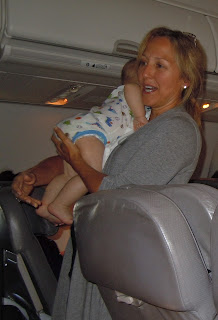 Faithful readers might recall that air travel is not my best thing. It isn’t even down the hall from my best thing. They said it couldn’t be done, but I once missed a connecting flight during a five-hour layover by falling asleep in a gate in the wrong terminal. Air travel and I have agreed to hate each other.


Still, my recent trip to Boston seemed auspicious. I had booked my first-ever cross-country trip that was non-stop, on an airline I hadn’t tried, and it was a cheap ticket besides. I sat in a middle seat between an old, small, translucent gentleman, and a younger opaque fellow who studied a PowerPoint presentation on financial planning for six hours. Neither one had any body odor, if by “body odor” we are referring only to a surface fug, and not something manufactured on the spot internally using only beef jerky and a team of bacteria. So things were looking up. As I sat down, I noticed a small sign printed under the window that said “seats in this row do not recline,” which was disturbing. I chose to see this sign as a directive to adjust attitude, and sat up in mandatory primness imagining that all the rest of the rows said “seats in this row do not recline all that much.” It helped. 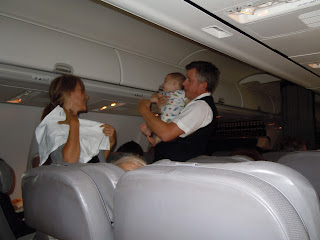 The flight was fine, the pilots hit the ground with the restraint they get the big bucks for, and I was in a good state of mind for the return trip. And that is when several miracles occurred. I arrived at the correct gate in time to visit the IPA dispensary across the way, unpacked my new used laptop, located a wireless connection, figured out how to suck out some Internet all by myself and had a Facebook chat with my sweetheart. Somewhere, pigs flew and weasels learned to play Parcheesi. So things were looking up.


I sauntered over to the gate and inquired whether my Alaska miles could be credited to my Delta account, and they made it happen. Just then a woman came up and said she had been talking to someone–she pointed towards an old woman trembling behind a massive baby stroller–who had never flown before, let alone with an infant, and could use some help. The counter people peeled out and began to speak to the old woman with kind voices, one shouldering the baby and the other folding up the stroller and seeing it to the plane. The old woman was rigid and mute with terror, and the personnel were respectful and reassuring, easing her on board.


She and the baby, of course, were installed in the row behind me. 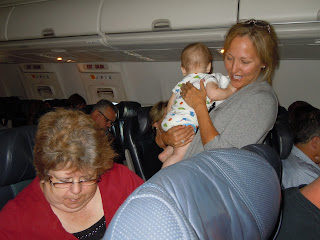 My seat mates were two jolly Boston men who looked like they might be capable of both odors and excessive noise, and exhibited neither. So things were looking up.


We may have been two-thirds of the way across the country before the infant behind us reminded everyone he was there. The old woman, still more or less paralyzed, was not able to be a comfort to him. Within a minute, the Alaska Air flight attendant, Mr. Kelly Morrow, scooped up the child and bobbled him up and down, entertaining him with his shiny name tag for a good ten minutes before he had to distribute sodas. He produced for me a hot sandwich that was amazingly not bad. The infant rediscovered his lungs a bit later.


Two rows up, a beautiful woman asked to hold him, took over the easily-consoled baby and wrapped him in a dashing faux-leopard blanket. He was adjusted to full-view cooing position and handed around the plane. An old man in the next row demonstrated his foot-tickling expertise. The baby body-surfed around the cabin.


Flight attendant Kelly dropped to one knee to check on Grandma, who revealed that she was, in fact, great-Grandma, and had had all her lower teeth removed the day before. This is a really hard thing for anybody, taking a baby across country, especially on your first flight. You’re doing a wonderful job. Was anyone planning to meet you at Portland? Her daughter and granddaughter were, yes. Do you know where they were planning to meet you? Not exactly, no. Worry bloomed on the old woman’s face. How many parts to an airport were there? Kelly extracted some phone numbers and went to call the family and make sure they were coming, and find out where he might personally escort her. The baby was briefly returned. 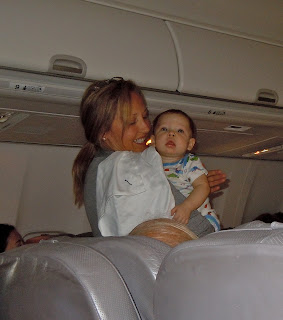 At the next squall, the beautiful woman jumped up and asked for diapers and baby wipes along with the baby. She disappeared for a while and came back with the child pink and resplendent in leopard fur, and the old woman’s neighbors distracted her with chat and cheer during the landing. Someone retrieved her bag from the overhead bin, someone else carried it, someone held the aisle clear for great-Grandma and her escort Mr. Morrow, and there was a general blessing of hand-pats and foot-tickles all around. I believe back in row twenty a collection was being taken for the baby’s college fund. And someone who is not comfortable with or attracted to babies and had nothing else to contribute decided to pen an essay.