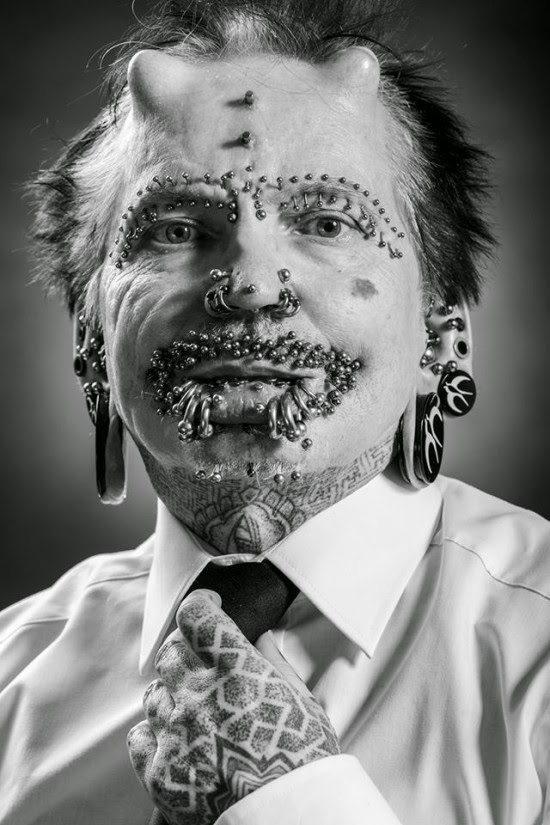 German citizen Rolf Buchholz was denied entry into Dubai at the airport, ostensibly because he was suspected of practicing black magic. The horns he’d had installed on his head made Security nervous. If I were to see him coming through my line with those horns on his head, I wouldn’t have immediately thought of black magic. I’d have thought, dude can’t buy hats off the rack. But they’re touchy in Dubai.

Mr. Buchholz had plenty more going on than just the antlerage, though. In fact, he is in the Guinness Book of World Records for having the most piercings of anyone on the planet. And you know what that means. That means there’s someone in the world whose job it is to count holes in a human being, outside of a medical setting.

Many of Buchholz’s personal barnacles are in the facial region, especially around the mustache and soul-patch zone. Which means his stubble has to fight its way through a lot of rubble. Perhaps he doesn’t have much of a beard at all. Perhaps that’s how this whole business got started in the first place. “Pretty thin beard,” he probably said, only in German. “Perhaps it would look more manly if I sewed in a raft of little beads.” Black magic aside, this can be a serious threat to passers-by if he does have to shave. When we try to mow the alley next to our house, pebbles shoot out everywhere. It’s not safe. And God forbid the guy has to sneeze–he’d be all Dick Cheney on a duck-hunt.

Even if he isn’t a danger to others, his enhancement project can’t be good for him. I only ever got the standard two extra holes put in. Had it done at a mall with the neighbor girl. I can still remember the sound of the chnnk as the needle poked into my iced-up earlobe, followed by the kchrrrr of the dental floss pulling through. Within a year I had accumulated a bunch of huge hoop earrings with metal dangly bits. Liberace’s piano would have looked right at home under them.

It worked for me for a while. I’d discovered long hippie dresses made of India-print cotton, and with earrings like wind chimes I was finally, for the first time in my life, fashionable, and on the cheap. Then the earholes began to sour. They were sore and crusty and I’d knock the pus off and keep jamming in the jewelry. Then I left it out for a bit, and then a bit longer, and eventually abandoned it altogether. It was just as well. Sometimes they’d get caught on my hair or my dress and start ripping things, and it wasn’t worth the trouble. Poor Mr. Buchholz is at risk of losing half his face every time he pulls off his T-shirt.

So why do that to yourself? I can only assume Mr. Buchholz wanted to distinguish himself in some way. And he just wasn’t up to learning the violin.