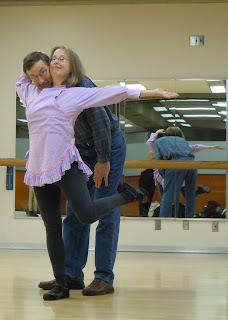 The name of the class Dave and I are taking is “Crash Course for Weddings,” so we were expecting a little violence. The basics were easy. The man clutches the woman by the shoulder blade and hand in such a manner she cannot escape, and then he tries to step on her. She, in turn, tries not to be stepped on, and with the addition of grace, you’ve got your ballroom dancing. It’s a six-week course, and we’re not scheduled to learn grace until the final week.

Most of my personal grace is tucked inside. I don’t like to let it out where just anyone can see it; I’m not that kind of girl. There is a young man in our class who already has grace and his own dancing shoes, so he may be a plant. Most of the rest are couples with some seasoning. Our teacher, Melena, wrote out the plan of attack on the blackboard. In the first lesson we were going to learn Waltz, Foxtrot and Tango. The second lesson would cover Cha Cha, Rumba, Salsa, East Coast Swing, West Coast Swing, the Stumptown Stomp, the Guacamole Two-Step, the Halifax Hop, and, time permitting, the Zombie Cannonball. 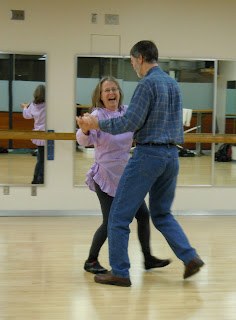 At the beginning of that second lesson, Melena inquired what we remembered from the first lesson. In the ensuing silence it was possible to make out the little grinding noises old people’s brains make when they’re trying to re-wrinkle, but sadly, most of ours had gone smooth. We spent the next two hours reviewing the left side of the waltz box-step, with particular attention to style, coordination, and the care of the fractured pelvis. Progress was made, and towards the end a dozen couples were lurching across the floor with true bumper-car gusto. Melena was very encouraging, noting that it takes upwards of 10,000 hours of repetition to learn one thing, and recommended we consult youtube videos in our spare time to review the steps, generously assuming we were wieldy with the interwebbing. 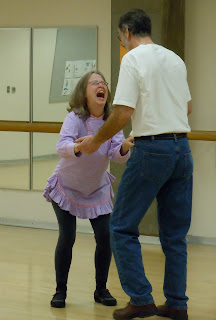 By the midpoint of the third lesson, we were enchanting; we were a vision; we were Swan Lake reinterpreted for balky grocery carts with a bad wheel. Melena revised her pep talk with the additional observation that most of us were seventy or eighty years past the time in our lives we were actively acquiring new knowledge, and shouldn’t expect to absorb things with as much zip as we once might have. Which is about as delicate a portrayal of what happens to old brains as I have ever heard. She’s a good instructor, patient, knowledgeable, and probably very entertaining to her friends over beers right after our class.

The “frame” is the contact point of the two dancers and helps to keep the smaller one from tipping over. With the frame, the leader can telegraph his course of action, if he happens to know it in advance, to the follower, much as a Segway vehicle infers direction by the momentum of the rider. Dave is exactly half-again my weight and packs a lot of momentum, plus his Segway is broken. Still, we managed at least the degree of elegance demonstrated by a man steering a file cabinet across the room. 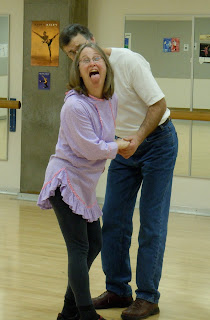 Full-contact ballroom dancing does bring out the competitor in each of us. Unfortunately, we are not yet moved to compete, Bristol Palin-style, with the other couples. We just compete against each other. It’s a start. We’re pretty well matched–no telling who’s going to win. He might be able to take me in the East Coast Swing, but the money’s on me to finish first in foxtrot. Cha-cha-ching!