A Cure For Cancer 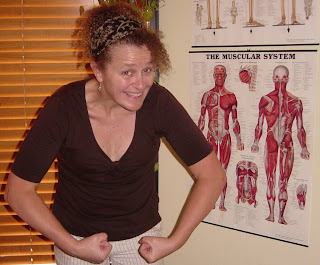 When I was much younger, I could get really good and sick and not read a thing into it. That’s all changed. For instance, a couple months ago I developed a little strain in my front ribcage. On the one to ten pain scale it rated about a .005. Merely by spending my waking hours thinking about it, I got the little strain to show up on the back of the ribcage too, and got the pain level all the way up to .006. I could only feel it when I inhaled deeply. Naturally, I concluded it was cancer. Let other people ignore symptoms until it’s too late; I’m going to be proactive.

I got a chest x-ray (normal, but what do they know?) and made an appointment with a doctor, and in the meantime I went to my massage therapist, Maria McLaughlin. She’s scary strong, but she uses her powers for good. Still, I almost didn’t mention the whole ribcage thing, because I was pretty sure it was cancer, and not part of her terrain. She listened, and peered at my midsection for a moment, and then rolled up her sleeves and told me she’d fix it. She wasn’t even wearing sleeves. That’s how strong she is.

I’ve been to a number of massage therapists over the years, and there are as many styles and methods as there are practitioners. It always feels good, but some of them aren’t really giving themselves what I’d call a workout. Some of them just tap on you as though their fingertips were petals, or blessings. Some of them just massage your aura. Some of them even leave the room, probably for a cigarette, after laying warm rocks on you, which is perfectly pleasant if you don’t think of it as the beginning of being buried alive.

But Maria is determined to set you straight, or make you swear up and down that she did. First she oils up. (It smells great, but I’m pretty sure it’s bear grease; I believe I saw the unfortunate grease donors stacked up outside in the alley after she strangles them. Could be cardboard boxes, but I think it’s bears.) Then she starts moving parts of you around to see how far they’ll go before they snap off. Basically it’s the same thing you do to the chicken to see if it’s done. She waggles your leg around counterclockwise: first to nine o’clock, then to six, and by the time she’s gotten to three o’clock, you’ve briefly glimpsed parts of yourself you’d only heard described by others.

As far as I can tell, Maria’s plan is to remove your muscle fibers, one by one, from their moorings, straighten out your skeleton, and then re-attach the muscles when everything is all plumb and square. She pulls your musculature away from the bones and hangs it up somewhere nearby so it doesn’t wrinkle. I would have thought the little muscles along the ribcage would be tough to spring loose, but she didn’t have a problem with it; just got a grip on the spleen, wedged her knee on the liver and pulled upward on the sternum. Then she tucked the unattached muscle fibers under the gallbladder and did a half-hitch with an intestine loop to get them out of the way until she was ready to stick them back on again.

From there, straightening out the skeleton was a breeze. She only needed to whack at about a third of it, and threaten the rest, which fell into line out of sheer terror.

It’s been a week. My cancer is gone. I swear it, up and down.