Here’s how old I am. We had brontosauruses when I was a kid.

Then they took them away and replaced them with apatosauruses. It never sat right with me. The deal was, some 19th-century guy named Othniel Marsh found bones and arranged them into something he then called an Apatosaurus. And soon after he found more bones and strung them together and called it a Brontosaurus. And somewhere down the road everyone decided that they were basically the same critter, so they stuck with the first name, and made it official in the ’70s.

Well, fine. I didn’t love it, but I went along with it, because the school kids were nonchalant about having an apatosaur and no brontosaur, and they were wieldy with the metric system, and were annoying in other ways as well, and I didn’t want to be that dagnabbity person.

But it festered. I happen to be exquisitely sensitive to the music of language. And if you’ve got yourself a beast that wouldn’t even fit in my yard without folding up–and I have a double lot–you don’t name him “apatosaurus.” Just listen to the name. It belongs to a little scampery thing. A little hopping noodle of a dinosaur flitting through the woods with its tiny feet going apato apato apato and making eeping noises. Not an enormous thundering megadude who could quiver a whole swamp just by strolling by. BRON-TO. BRON-TO. 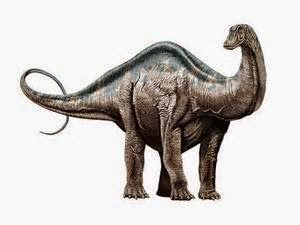 Apatosaurus, my fleshy fanny. Both names come from the Greek, of course. The Greeks were ancient, and thus closer in time to the dinosaur era and more familiar with the subject matter. Bronto-saurus means Thunder Lizard, as well it should. (Dinosaurs weren’t lizards, but that etymological ship has sailed from every port.) And apatosaur? Goodness gracious. It means “sneaky fake lizard.” Ain’t that a fine how-do-you-do.

There isn’t really any good reason to resurrect Apate, the goddess of Deceit, at all. You know that rental house across the street that had been blessedly vacant? And then one day the U-Haul pulls up leading a convoy of rustbuckets and all manner of crap starts coming out of them and going into the house? That’s Apate’s family. Her mother was Night, her father was Darkness, and of course they had a shitload of kids: Suffering, Doom, Carnage, Blame, Old Age, Strife, Retribution, and Violent Death. And the whole crew is going to be out on the front porch making noise 24/7 and nobody with any taste and discretion is going to think: I should name a noble dinosaur after one of these.

Nevertheless thanks to Mr. Marsh we have a splendid edifice of muscle and appetite with a dinky name. It’s like if Dick Cheney went by “Skippy.”

But now the Brontosaurus is back. The new powers that be have decided that the critters had slightly different collar sizes and could rightfully be considered separate items. If I run into one, I’m not liable to throw a tape measure around its neck. I’m just going to assume it’s a Bronto, baby.