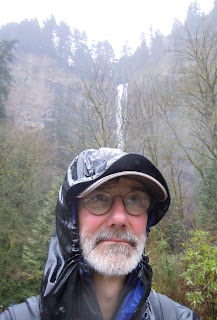 My goodness, but it’s raining; been raining for days. I thought the sky had forgotten how to do it.

We’ve soldiered on underneath one improbable sun after another, day after day, all through last winter and into the summer, unmoistened and edgy, wondering who’d put the order in for this unrelenting brightness. Recent immigrants, probably. Arid folk who can’t even get into emotional gear unless they’re pelted with photons, who require an unremitting stream of solar energy because they’ve never learned to put any energy by. They have failed to stock the root cellar of their souls.

I’d felt sorry for the sky. I myself experience an odd phenomenon wherein, from time to time, for no reason at all, I momentarily forget how to swallow. I’ll be all ready with a nice package of excess saliva and I start to send it backwards and something locks up. My brain actually engages intellectually at this point: let’s see. Is it tongue pressed up against the palate? And then something sort of relaxes at the back of the throat, and everything whooshes down? Or does the relaxation part happen first? Or am I supposed to push somewhere? Don’t tell me, I’ve got this. I used to do it all the time. So far, it’s always worked out after a few seconds.

But that’s how I imagine the sky. The Sky of 2015, the sky that forgot how to rain. The sun poked out in the middle of the winter for a week or so and far too many people started to admire it, and it said, well, shoot, yeah, I guess I can hang around for a while, since you’re all being so nice, and that was that. OMG, the sky says on its facebook page, I can’t believe I ate all that carbon! LOL! And the sky gets a zillion thumbs-up, and it likes a little affirmation as much as the next guy. And by summer, when the lakes shrink up and the big snowy mountain experiments with nudity, it’s too late. The sky has lost the knack. I remember I’m supposed to pick up a bunch of water over here in the ocean and then wring most of it out over the Coast Range, and then throw the extra at the Willamette Valley, but right now I can’t remember how I used to scoop it up.


But now it’s raining like the clouds just fell down all at once. The 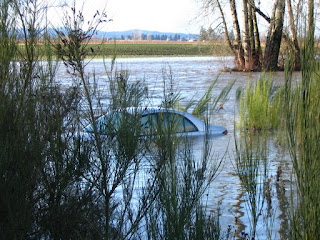 TV weathermen are standing in flooded streets with little meteorologist woodies. The roof sounds like the staging area for Santa’s reindeer plus his backup team. The low spots in the garden are advertising for trout. The Coast Range is getting fifteen inches of water and it’s going back to work on its abandoned Flattening Project. The valleys are exalted, and the mountains are laid low. Mud slips. Rocks loosen. Roots change their minds about things. Trees entertain existentialist thoughts. Everywhere you look, water is doing its damnedest to get to the center of the earth, thwarted only by topography. It is a beautiful display of water and gravity, of the way things should be.

“There’s water in the basement,” comes the text message from the new renters.

That’s one way to thwart. Well, it’s just a little joke rain plays on me because it knows I like rain. Ha ha! How do you like me now? Rain can be quite the scamp. I remember how to swallow and Dave goes for the ladder to check the gutters. But I’m calm. Everything is as it should be. We’ve still got water, and we’ve still got gravity. I don’t want to float off into space. I certainly don’t want to float off thirsty.