The Dead of Winter 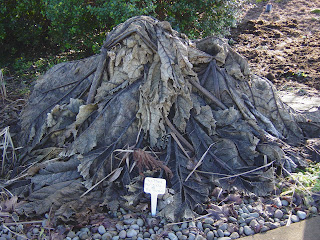 Just got back from The Oregon Garden. They’ve got a number of ways to lure you out there, and the bait this time was a nice quilt show. They also have a genuine Frank Lloyd Wright house on the premises that was preserved and moved at great expense. I have taken the tour of the house, a minimalist box in pink cinderblock which was built during Mr. Wright’s Jersey Turnpike Rest Area period. I don’t know. I’m all for preservation, but even some Steinways make better kindling than music. There were no waterfalls cascading under the house or anything, but I think there might have been something special about the toilets.

There needs to be some kind of draw, if not outright subterfuge, to get people to come to this garden, because it’s really remote. It’s right next to Narnia on the map. There’s no trouble finding the exit from the freeway, which is clearly marked for The Oregon Garden, but then all hell breaks loose for fifteen miles. There is one turn after another, far beyond one’s navigational capability, culminating in ever-more-frequent right-hand turns, until by the time the parking lot comes into view, one has the impression of having been screwed into the landscape. Reinforcing this notion, there is no finding your way back home again when you leave.

Even though I made the trip for the quilts, I did want to see the garden in mid-winter. We’ve been having more winter than we’re known for here and we gardeners are presiding over some major winterkill. I have a personal stash of Agapanthus plants that have grown and multiplied for about four years now, becoming something of a feature in my garden, and in December they turned into clumps of snot. Everyone in town has been installing plants from the next zone over and getting away with it until now. So the only thing that would cheer me up, as I survey my freeze-dried New Zealand flax and my paralyzed Abutilon and the snot clump collection, is to see some horticultural devastation on a massive scale. A real big-league die-off, acres of regret and poor choices. I’d perk right up.

Seems the folks at the Oregon Garden make a point of buying local and showcasing the legitimate wonders of our zone. It looked pretty good out there. It was still winter, but the beds were raked clear of debris, unlike at my house, and the dead perennial foliage was trimmed back, unlike at my house, and the marginally hardy items were lovingly wrapped in burlap and crowned with compost, unlike at my house. This place was desolate, but still tidy. By force of habit, I examined the labels in the soil, so determining that this bunch of nubbly bits would become a helenium, and that stand of sheared sticks aspired to being a threadleaf coreopsis. It’s a little like surveying a youth hostel to see the Leaders of Tomorrow: it takes some faith and imagination. Gardeners, of course, have both. I am assured that the beauty of admiring a garden in winter is that you can appreciate its structure. Hell, if that’s all I was after, I could have stayed home and admired mine. If it had a structure.

Finally I came upon a nice stand of ruined New Zealand flax, and also a large dead plant with a “for sale” sign on it. Mollified, I was ready to go home. Wherever that was.