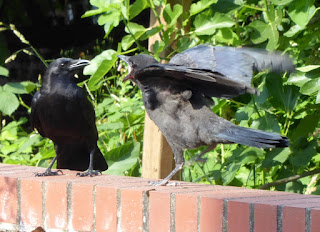 I was minding my own business until the crows started up, and then I decided to mind theirs. You get a little group of crows all going off at once this time of year, and odds are pretty good that somebody’s cat needs skedaddling. By the time I walked outside, the racket was tremendous. And there, in the sky, was a gyre of at least a hundred opinionated crows. It was something.

“What is that?” my neighbor said.

A dogwalker came down the alley and looked up. “Wow, that is really something,” she said, confirming our guess. The crows went round and round and round. They were circling above Sumner Street, just to the north. My neighbor Gayle poked her head out of her door with a look of abject horror.

“What are they doing, Murr?” Gayle is terrified of birds. Even the tweety variety. It might have been an early Hitchcock exposure. This was more than she could tolerate. She knows I like birds and, like other people who know even less about them than I do, she considers me an expert.

“I don’t know, Gayle. But isn’t it something?” Everyone agreed that that was exactly what it was.

Thing is, I have acquired a bit of bird knowledge. I’ve done some readin’, and some writin’, and I’ve also done some simple observin’, resulting in what I consider reliable enough lore, even if I’ve never read it anywhere. And what I know about our crows is they go downtown to roost in the evening most days of the year, and they get together in nice raucous packs to do it, but they don’t do it during nesting season. They stick around and jam stuff in their kids’ front ends to get them to shut up for a second. That’s what’s happening now. A little later, in August, the adults will molt and look like shit for a few weeks. Then when they’re all snappy again they gather the kids and hit the roosting scene downtown. This is too early for that. I briefly considered the possibility that there was a dead cow on Sumner Street, but rejected it. Even though that would have been a Life Cow for my yard list.

I settled on the possibility that one of the crows got into a can of malt liquor and started feeling a lot better about her lot in life, and then someone else showed up. “Go ahead, Harriet,” Millie would say, “one little sip isn’t going to kill you. Let the men feed the kids for a minute.” Millie always thought Harriet had kind of a stick up her ass, to tell you the truth. 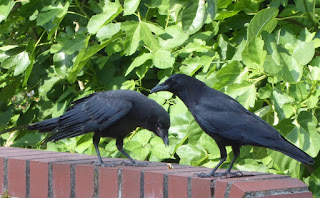 Harriet beaks away at the can and starts to feel kind of good too. “I mean, it’s brawwk brawwk brawwk all day long, am I right? And I told the little shit, pick up your own damn walnut. It’s right there in front of you. Put it in your face.” And Millie is all “You know it, girl,” and then the whole block shows up, and everyone’s going on and on about the entitlement kids seem to feel these days, and would the world come to an end if the girls just checked out for a little while? Fine and dandy to get all that help with building the nest but it wouldn’t kill those eggless wonders to take over all the feeding for a lousy half hour.

I mentioned my theory later to my friend Margie. “Crow funeral,” she said briefly.

Oh. Well, crumb. Maybe so. Margie’s husband had once plunked a crow with a BB gun and then their dog pulled the stuffing out of it in the street, and, she said, the crows showed up from miles around to circle and complain. And they didn’t forget, either. They harassed him and the dog every time they came outside for years. Windshield wipers fell off their truck, roof shingles began appearing in their yard, their home insurance lapsed when the annual bill failed to appear, and their credit rating mysteriously tanked. Don’t mess with crows.

I looked up “crow funeral” and it’s a thing. Scientists decline to characterize the crows’ behavior as “grieving,” preferring to assume instead that the crows are merely assessing what could possibly have gone wrong with the deceased crow, so as to avoid a similar fate themselves. 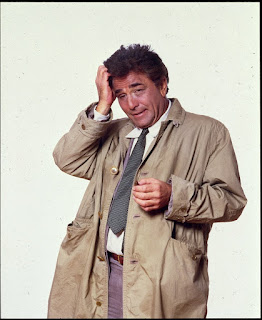 Horse poop. Scientists are so afraid of anthropomorphizing that they refuse to entertain the most obvious hypothesis. And these suckers were not investigating an unexplained death. They’re crows. If they were doing that, there’d have been a chalk line around the body, somebody would have a pipette and test tube, someone else would have conducted a test for lead, and the one that looks most like Peter Falk would say, “Excuse me, ma’am, I don’t want to be a bother. Just one more thing…”

That’s just a fact. Could have been any one of them. They all look like Peter Falk, in August.