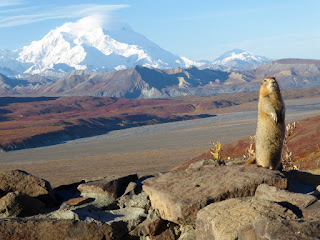 A while back, our friends and treasures K.C. and Scott got the word that they’d won the Denali road lottery, which meant they could drive their personal vehicle into Denali Park for one day, after the regular shuttle-bus season ended. And they thought we might like to join them. 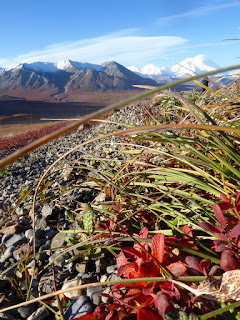 This sort of thing takes some (but not all) of the sting out of them pulling up stakes thirty years ago and leaving us behind. Their stint as our neighbors was doomed to end eventually anyway, unless they could figure out a way to shovel half an arkful of critters into a 40×50 foot lot in Portland. And even then they’d have had to buy up the rest of the houses on their side of the street to accomplish the trout pond and the sturgeon pond and the emu pen and the wine grapes. Scott had a bulldozer (yes, in his back yard) and no doubt was already scheming such a thing, but instead they left for the country, sheltered the hell out of an astonishing array of animals–most of them not destined for the plate–while holding down full-time jobs, and then sold the whole shootin’ match and moved to Alaska with a mere dog and a mere cat.

This is what you do when you are thus inclined and the opportunity arises: you leave your menagerie behind and go to a state where the menagerie takes care of itself, and you try to get a respectful peek at it as often as you respectfully can. 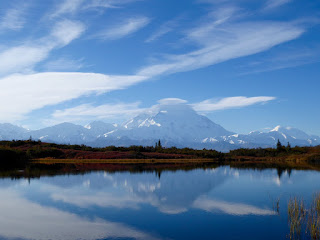 Denali! Well sure we would come. Alaska is practically right next door. To Canada, anyway. We hopped into a plane and met them in Fairbanks, where they’d just come in from a polar bear excursion, as one does, and off we went.

Denali was once Mt. McKinley and is now Denali again, although Trump has threatened to re-McKinley it, because Obama, so stay tuned. The big mountain, which had been around a long time before anybody called it anything, had been Denali until a gold prospector in 1896 decided to piss off some silver prospectors by calling it McKinley after the president who championed the gold standard. By 1917 the federal government officially renamed the mountain McKinley, as a consolation prize for his having been assassinated. McKinley was, irrelevantly, from Ohio, and so in recent years the Ohio delegation blocked attempts to snatch back the Denali name, but a few years ago Obama made it happen anyway, because he is an elitist who hates Ohioans.

All of which makes Denali even sexier than it had been. 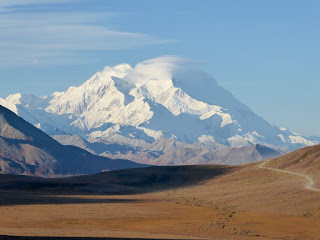 I did not have an image in my head of the trip into Denali. I rather thought it might wind around and around and terminate fairly high up the mountain, which is what we do with mountain roads in these parts, and because the thing is over 20,000 feet high, I worried a little that we’d be parked on the road all woozy and unable to get out of the way of rampaging caribou, should the need arise. But then again it would have been worth it to see the caribou, which would be a Life Mammal for me. There was the possibility of spotting much wildlife, including several that would also be new to me, such as the wolf and the Dall sheep. 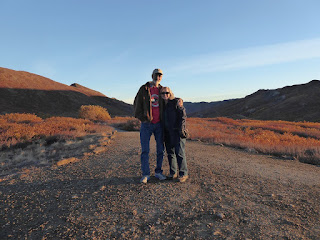 We got an early start and motored to the park entrance in the dark, and right away a few Life Ptarmigans were spotted, apparently, but I don’t like to count skitterings on the shoulder that I have to take someone else’s word for. Still, it was auspicious, and we pulled up to the entrance and waited for the go-ahead from the rangers, and then the road purled out ahead of us for miles, all prospect and promise, like the beginning of a long, good friendship.