Die Hard, With A Backpack 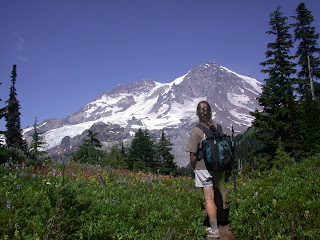 It was August 3rd, the birthday of Andrea (the good niece). In her honor, Elizabeth (the bad niece) attempted to leave me for dead on the slopes of Mt. Rainier. She will probably claim otherwise, but she can get her own dang blog.

To be absolutely fair, Elizabeth probably wasn’t initially trying to kill me by hauling me up there. As she brought up eight or nine dozen times that day, I’m the one who is famous for dragging people up mountains against their will. I don’t mean to be difficult. It just so happens that a lot of the things I think are worth looking at are way up high, and we’re down here practically at sea level, and I tend to believe anyone with sufficient peanut butter should be able to bridge the elevation gap. Furthermore, I like to believe that there are a lot of people out there who are secretly–very secretly–grateful to me for making them spend all day on a trail so steep you can reach out and touch it in front of you. At any rate, neither Elizabeth nor I suspected I’d be the one bounding up Mt. Rainier with all the gusto of a ninety-year-old asthmatic.

It didn’t even start out well. We popped onto the trail with the usual vigor, and within a few hundred feet I made the announcement that I’d be slowing things down until I got my second wind. Turns out I didn’t have one. I never kicked it into a gear past Trudge the whole day, and felt distinctly ill and fatigued to boot–the kind of feeling young people blame on what they’d ingested the day before, and old people blame on being close to death. About halfway up, Elizabeth commented on our good weather. “Fwabbadabby bort,” I observed. Elizabeth was alarmed. “Have you had enough water?” she wanted to know. “Biscorpal!” I assured her. “When was the last time you peed?” she asked–impertinently, I thought.

I flapped my hand limply downhill towards a point quite distant in both space and time. “You’ve got to drink more water, now,” she insisted. “Bawa,” I agreed. She uncorked the bottle and watched me drain it, like a little Nurse Ratched dispensing meds in the looney bin. Elizabeth had never seen me this feeble and might have been a little worried. After all, she knew she probably couldn’t dig more than a shallow grave in that rocky soil. We continued upslope at a glacial pace. I was enveloped by a vortex of flies who were probably trying to get a jump on things.

We finally crested a ridge at about four miles and were rewarded with meadows of flowers. “Look at those beautiful lupines!” Elizabeth enthused. “Boopings!” I agreed. Elizabeth brought out more water. I don’t know where she found that goose-gavage funnel she used to get it down my gullet. Still hadn’t peed. We plodded onward, and were greeted heartily by a jaunty fellow at least fifteen years my senior. He was 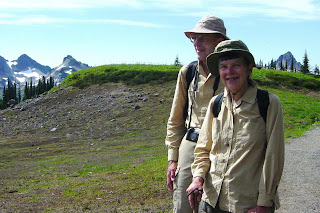 The two little uphills added another thousand feet of elevation gain, for a total of about 3700 feet in five miles. Pops was merely the first in a series of sturdy, smiling and thoroughly annoying septuagenarians, their legs churning like pistons. We met Pops one more time after we turned to go back. “Did you get to the lakes?” he wanted to know. We hadn’t. “Good for you–leave something for the next time!” he said. I will say, he looked durned hard to murder.

I had put away about three quarts of water before I finally had to pee and Elizabeth left me alone. Looking back, I can only imagine that the previous week was to blame. I’d given a pint of blood, and it had been two hundred degrees in Portland for days on end, days in which I had drunk massive but apparently inadequate amounts of water. The human body is supposed to be more than sixty percent water, but I had done a little economizing and gotten it down to a nice tidy forty percent. All the cells in my body had gone gummy, and all the wa 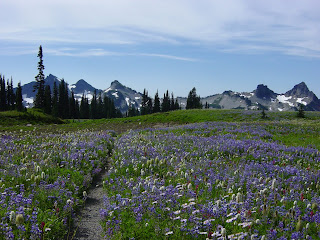 ter I’d drunk on the trail had been devoted to re-inflating them, leaving the brain cells for last, before any had elected to tip into my bladder.

“You have to admit that those meadows on top were stunning,” Elizabeth said. And I did have to admit that. They were almost as stunning as the ones we drove right up to the next day, right off the parking lot of the Paradise Lodge.