Dispatch From The Belfry 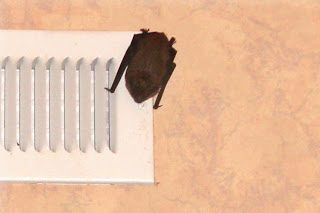 Night before last, I felt something crawling on my back and discovered a largish ant in bed with me. He seemed to be working solo, but I couldn’t imagine what an ant was doing there, and even after I took care of the offender, I felt kind of itchy all night. What next? I thought. Rhetorically, I assumed.

Then last night, as I was trundling off to bed, Dave mentioned that it sounded like our cat Tater was having one of her standard epizootics in our bedroom. If this had occurred during the reign of our previous cat Larry, we would have concluded she was on High Moth Alert. But with Tater, it was more likely to be a random firing of her rambunction gene. I headed upstairs, walked into the bedroom and flipped on the light.

BAT. Bat bat bat. Giant bat doing laps in the airspace. Now, I like bats. In context. The context being outdoors. I love to watch them swing through the air like a celebration of twilight. I once saw one in the zoo hanging upside down and entertaining himself in a most enthusiastic manner. It was something.

With the bat in my bedroom, however, I lost all decorum. I went all 1950s-sitcom-wife over the thing. I hit the carpet like (as I later discovered) guano, and yelled the same thing over and over again (a major religious figure plus a salty adjective). Bats have very acute hearing and possibly demure sensibilities as well, and this couldn’t have been pleasant for it. I’m not proud of my reaction, and it’s hard to justify it when you see the photograph I took of our wayward mammal. She’s all folded up just like a little wallet, but airborne, I am here to tell you, she has the wingspan and demean 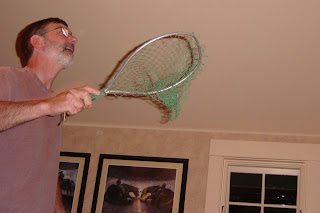 or of a pterodactyl. Dave came to the rescue and tried to encourage her out the window, but she was not persuaded. Instead she flew into the closet and hung herself up somewhere on his clothing (gabardine, rayon, cotton, bat, flannel), making extraordinary little scolding noises, rattling like a string of beads. Among the things Dave did that I was incapable of doing at that point was to lean into his shirts and blow on them (“I didn’t want to hurt the bat”).

Ultimately, Dave managed to coax the bat into flapping around the room again and he nabbed her with a short-handled fishing net, stepping nimbly around my prostrate form. He mused later that it would have made more sense to open all the windows, turn out all the lights and shut the door, and the bat would have found her own way out. And she probably would have, too, but if I hadn’t seen her exit, I would never have gone to bed or changed my clothes again.

It’s entertaining, being in a room with a bat and a black cat, but it’s not restful. I had to eat a whole bowl of eyeballs just to settle down.