Does This Extinction Event Make My Asteroid Look Big? 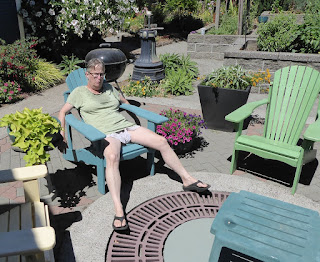 Everything has its own perspective. What’s good for one might not be so great for another. For instance, Dave doesn’t like it, but he has effortlessly maintained a five-star rating for years on Mosquito Yelp, so somebody’s happy. And while most of us are not thrilled about deadly disease, somewhere to the north a population of suppressed viruses has long awaited a savior that will allow them to rise again, and now that our permafrost is melting, their day of redemption is at hand. Hallelujah! (Or holy crap, depending on your viewpoint.)

So I don’t know if the viruses and the bacteria and the mosquitoes are going to inherit the earth, or whether they are suitably meek–I wouldn’t have thought so–but somebody is going to, and it isn’t going to be us. And that’s because of us. We are the architects of the Sixth Extinction event and it’s certainly looking like we’re going to be among the missing. We’ve done it a number of ways. We’ve resurrected a fatal bolus of carbon from its burial grounds and sent it into the sky, and done it in a blink of time. We’ve scraped off our natural vegetation to grow monocrops, and sent the fertilizer required into the oceans, killing them piece by piece. We’ve overfished. And so on, and so forth.

Lots of folks don’t really believe we could make that much difference, but that’s false modesty. Lift up your heads and own it, humans! Together, we’re as big and strong as a killer asteroid! Boo-yah!

Well, poop. We didn’t evolve to consider long-term consequences. We’re wired for the tiger and, at most, the next growing season. So instead of trembling in fear over the disaster we’re creating, we’re all worked up about the moles in our lawn, or the waitress who totally dissed us. We’ll point at something shiny in the road and not recognize it’s Godzilla’s big toenail. What’s that shadow?


And maybe some of the fun we’ve been having could have gone on for a while longer, if only there were a reasonable number of us to dilute the consequences of our shenanigans. But there’s nothing reasonable about our numbers. We’re seven or eight billion and headed straight up. We’ll have to get those numbers down. Way, way down. And honey, that involves attrition. That involves death.

There are a lot of choices here. There’s your starvation–that’ll wipe out a bunch–there’s your disease, your plagues, your genocides, your war. All of these will come to pass, especially since so many of us are going to be on the move. Also, there’s birth control. Can’t realistically count on anybody keeping it zipped but we could make reliable birth control free, and encourage or even require people to hold it down to one or (why not!) none. And of course there’s abortion.

I’ve read the script, and at this point it is mandatory to assert that even though many people support the right to choose, nobody is pro-abortion. But it’s not true. I, for instance, am all for it.

Yes, I said it: I am a big fan of abortion. I believe that at over seven billion and counting, we can no longer consider ourselves so very precious. I don’t even think I’m precious. It would be better if we just quit getting knocked up (except maybe the once, if we absolutely must), but we do. There might be 16 billion of us before this century’s out, all wanting a standard of comfort and convenience we never could afford. As a result we’re about to go extinct and take most everything down with us. I’m pro-abortion because I’m pro-life. In fact, I’ll double down. When I look at those in power who are so willing to burn the whole village down just to hunker in their spider-holes and fondle their money, I think in some cases abortion should be retroactive.

I know this upsets people. I can hear some of you clicking off, never to return. I’m sorry about that, because I love my audience, and small as it is, I don’t want it any smaller. You all sustain me. And mostly I want to make you laugh, and maybe every now and then to make you ponder. As I’m typing this, I am only imagining the rejection; I can still forestall it; I can write about chickadees, and not post this at all.

That’s the beauty of looking realistically into the future. You can see what your choices are, with your eyes wide open. I choose to post.