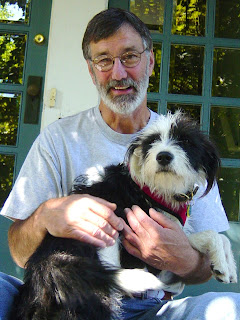 Dave has an affinity for terriers, and they look good on him. So when Mary Ann got her new dog Cooper, a pound mutt, we took lots of pictures. This is her first terrier.

Cooper will actually let Mary Ann get some work done. Her previous two dogs borrowed heavily from the border-collie genome, and tended to last about three minutes on a “stay” before they reminded her that it had been about three minutes since she taught them anything. Consequently they both knew several thousand different things to do, fetch, slide down, point at, look for, etc., and it was a miracle she was ever able to get anyt 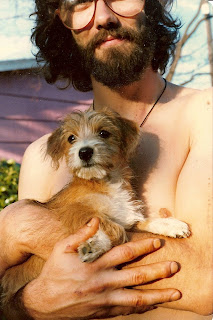 hing done at all. Ultimately in order to have ten minutes to herself she resorted to telling them to open the front door, close it behind them, pop down to the grocery store, pick up some evaporated milk–not the condensed, and the 5-ounce, not the 12-ounce–bag up some arugula, count out the exact change, drop a quarter in the Jerry’s Kids box, see who was on the cover of People and report back. And if she was lucky, she was finished wiping by then. Cooper is a little more relaxed.

Our old dog Boomer, also a terrier mutt, was a good fit for us. She was so cute it wobbled your heart. She was so cute as a puppy that when she’d roll over and piddle on herself, that was cute, too. We snapped her up and stocked up on Lysol and called it a bargain. She was affectionate and loyal, but she also had an independent spirit that we appreciated, because we are not the sort of folk who want a dog’s undivided attention. 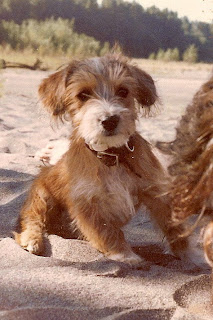 It was months before we were able to observe how she got out of the back yard, because it hadn’t occurred to us that a fourteen-pound dog could climb a six-foot hedge, hand-over-hand. Then off she’d go on her daily route. Visits included the neighbor man, a set of pre-toppled garbage cans at the end of the alley, and the local tavern, where she’d enjoy a nice bowl of Heidelberg while the proprietor dialed us up for retrieval.

The neighbor man thought she was so cute that he routinely gave her as much food as she would take in. She could maintain that for the amount of time it took to get back home, where she would knock urgently at the front door, run inside and hurl on the floor, presenting us with the neighbor’s dinner in virtually original condition. “That’s bigger than her whole head,” we would marvel in disbelief, and then she’d take two paces and do it again. Fortunately, she never ate the baking powder biscuits. Those were strictly for burying in the back yard. She didn’t know how to climb back over the hedge, and so she would knock 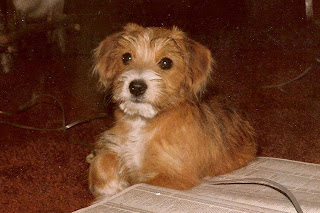 at the front door, run to the back door, shoot outside and stuff the biscuits in the garden somewhere. Boomer’s Biscuit Mulch kept the weeds down for years.

For a dog this resourceful, dry kibble was definitely the food of last resort; she’d take one at a time and crunch it down, lips peeled back in distaste. We went through almost two bags of it in her entire lifetime. Who knows how much longer than seventeen years she would have lived with a proper diet? 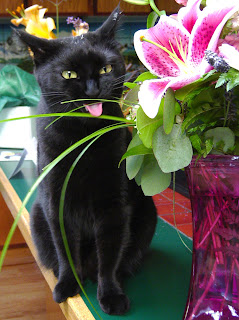 I guess it’s just as well we never had children, because we probably overvalue the ability of animals to fend for themselves. Consequently, in the post-Boomer years, we have become cat people. We are still the recipients of intense affection, expressed somewhat differently in the form of head-bonking, eyebrow-chewing, and kneecap-gnawing, but now we can go away for up to three days, leaving behind a critter with world-class napping skills and a rich interior life. When we come home, it will be to a very well-rested cat with three days of love stored up and a kneecap jones. Ain’t nobody going to sleep tonight.