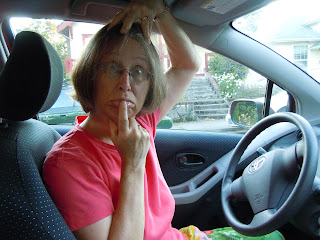 This was my first automatic car. The shift includes a third gear snugged into the same slot as “drive.” And that’s what I drove in for the first 1500 miles: third gear. Sure enough, my car figured out something about me that everyone else has known for years. “She’s a little slow,” my car whispered to the other cars in the parking lot, tapping itself lightly on the head gasket. “Let’s keep it good and sludgy so she doesn’t hurt herself.” 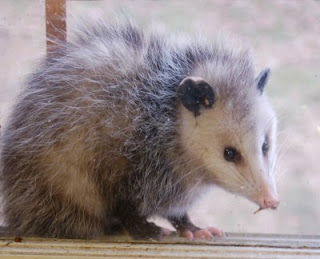 And that’s what my car did. It drove sludgy. It drove like a toboggan in cheese. Or a constipated possum. Or a Volvo. Climbing a hill, it had all the enthusiasm of a seven-year-old at bedtime. I kind of related to it in a personal way, but the whole point of driving a car is to get more pep than you’d have on your own. Plus, it was only getting 32 miles per gallon at best, which seemed wrong for a car the size of a postage-stamp dispenser. Once Dave noticed I’d been driving in third, I asked the mechanic if I could get a second chance to instruct my car how I drive. He pondered, squinted, then revved up his brain by snorking snot back into it, wiped his nose on his sleeve and said, “you know, I think it learns how you drive continuously. Just keep driving the way you normally do, only in drive instead of third.”

I should have recognized this for the evasion it was. It was classic postal-handbook. When you work for the post office, you get numerous opportunities to placate customers. “Letters never get truly lost,” you say. “It’s probably gotten stuck behind the flap of another envelope, and it will shake out eventually and get back in the mail stream and we’ll have it back to you, right as rain.” As a customer-service gambit, this works because you want to believe it. Your customer wants to believe it. And you’ll be far away by the time it becomes clear the letter is in postal purgatory, which is right next to unmatched-sock purgatory and the limbo of unrecalled words. We’ll never see that little, what is that, little folded-paper thingy with the stamp in the corner–whatever—dammit–again. 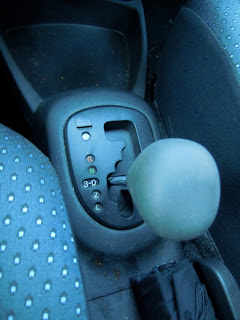 My mechanic had no idea how to make my car forget it had ever met me. I may be able to race it to the top of a hill, but it has a way better memory than I do. I continued to drive it new-normally with no change in its attitude. Finally this year I brought it in for maintenance and mentioned the problem to a whole new guy with a whole different brain and he and his brain thought he could help. It worked. After four years, the car is demonstrating something close to moxie, and gets several more miles per gallon. “What did you do?” I asked.

Well! He unplugged the battery, and plugged it back in. Of course.