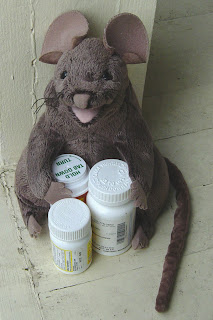 Says here in the newspaper they’ve discovered that a drug for stroke victims seems to be helpful for increasing the brain power of rats. I always thought rats were plenty smart to begin with. It could be I just assumed that they were smart, because they are so unattractive, and on both ends. A lot of times it was the homeliest kids in class that turned out to be the brains, and even the kids who beat them up were careful not to mash them on the head. Rats are homely, so it stands to reason they’re writing code in their nests.

They injected middle-aged rats with this stroke drug and were amazed at how smart they became. Rats without the stroke drug became senile at a more rapid pace. I don’t know what constitutes a senile rat. I would consider it a mark of senility if the rats repeatedly went into one quadrant of their cages and then turned around and went back where they started, in an effort to remember what they went into the other quadrant for to begin with. Then they’d go back to the quadrant and forget what they’d remembered and start nosing around in some new scratch. So that’s: forth, back, forth, back, nose around. I’ve had more opportunity than most to observe lab rats and that’s pretty much what they do. My colleagues in the laboratory did not mark this as a sign of rat senility, however, and they were unanimous in their opinion that rats are way smarter than mice. I haven’t ruled out the possibility that this is academic myth-making based on bias against mice, who are kind of cute; cuter, in fact, than my colleagues ever were in grade school, back when they were getting beat up.

I wasn’t able to glean from the article why it is we need smarter rats, but in an article on the same page, I learned that another particularly valuable pharmaceutical is being manufactured from the milk of genetically altered goats. They look okay, but no one really knows what will happen if they were to get out and mix with the general unaltered goat population. So there’s been a call to cease production of the drug. I’m sympathetic to this idea, although it would be a right bummer to have to tell people who want to know how you’re doing that you’ll be fine just as long as the goat fencing holds. On the other hand, it’s not much more tenuous a hold on life than we all have.

You wonder about some of these drug trials. In the same newspaper, it is reported that a whaling ship and an anti-whaling ship got in a standoff down in Antarctica, and the whalers pelted the greenies with chunks of blubber. The whaling ship was only collecting its legal limit of 985 whales for scientific purposes, basically minding its own business. Their scientific inquiry appears to be limited to selling whale at the highest price possible to Japanese consumers, so I guess it’s a study in economics, which is considered sort of a science. And if they sell all their whale, they’ll have to do it again the next year, and the next, because the study results are more reliable over time. Anyway, my point is the whaler-scientists chunked blubber at the interlopers because that’s what they had to chunk with. I suspect sometimes the pharmaceutical scientists just use what they’ve got, too. They already had a stroke drug, all made up; so they lobbed it at the rats to see what would happen. They happened to smarten up the rats, but think what a bonanza it would have been if the rats had grown thicker, more lustrous fur.