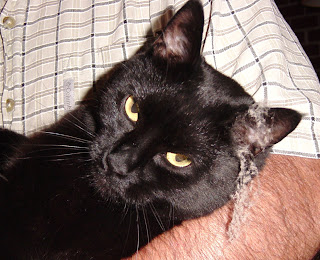 I’m on about a three-month schedule for cleaning the toilet bowl, but Dave cleans it more like weekly, so it never needs it when I think to check. In general, I would say he is much tidier. Or I would say he’s more obsessive-compulsive, depending on how crabby I am. Whichever, it has been pointed out that I’m not always holding up my end with the housecleaning. And since that is undoubtedly true, I have decided to do my part by leaning on the cat a little more. She’s really slacking.

I will allow that Tater is practically a genius at getting most of the important stuff into the litter box, even without it having been explained to her, and that was pretty exciting for a while, because the previous cat was very unclear on the concept. Still, this doesn’t get it to the curb. And she leaves little fuzzy clumps of DNA all over the place, just as though they couldn’t easily be traced to her.

She does have a spot on the inside of her left thigh that she’s kept sparkling. And she does periodically clean portions of our faces and kneecaps, although she tends to use her teeth to clean with, and no one really needs to be that clean. We point that out to her, loudly and suddenly, so perhaps we’re guilty of sending mixed messages.

I have requested on numerous occasions that she start to pick up after herself a little, at least, but it’s like talking to a teenager: you see the earnest, upturned face, but you can’t tell if the earbuds are in. Tater gazes at us with a certain reverence, but the only thing registering in her cerebral cortex is: “eyebrows. Mmmmm. Chewy.” And her reptilian brain is chanting: throw the mouse. Throw the mouse. Throw the mouse.

However, entirely on her own initiative and with dedication, she has taken to dusting off the computer keyboard with her belly fur. Results are mixed. The keyboard looks, if anything, worse, but she was able to clear quite a bit of data off the screen. Apropos of nothing, cats are really very hard to k 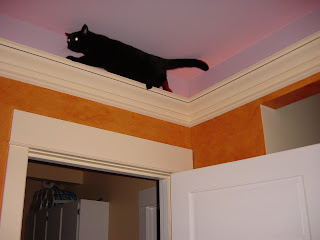 ill, and this one is all gristle and verve.

I think both of us had more or less resigned ourselves to a cat that was a net minus, in the cleaning department, until the evening we dozed off in our chairs in front of the TV. Gradually we became aware of a ten-pound black mammal creeping around the ceiling, which, if it hasn’t happened to you, is startling in the extreme. The mammal dropped to the floor festooned in cobwebs and strolled out to dispose of them. As a cleanliness bonus, now we get to wash out our shorts, too.