Echoes In The Braincase 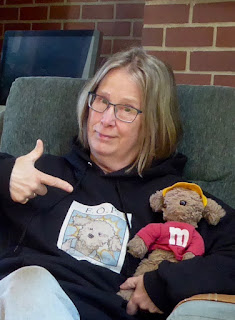 One of the perks of a digital life is it is possible to present oneself to others neatly giftwrapped, and even add a rumpled bow of modesty and self-deprecation. One can think about it. Engineer it. Why, not too long ago one of you fine commenters here said I was “smart.”

This is not so easy to pull off in person. And it’s particularly hard to do in the presence of younger people. And I don’t know what happened, but there are more and more of them around all the time.

I am well tolerated by the younger people in my life, all of whom I cherish. Now they are smart as hell. They have interesting opinions and different perspectives. I like to listen to them and every now and then I like to snap back with something witty. Problem is, a lot of the witty zone coincides with “things I just thought of five seconds ago.” And things that happened five seconds ago live in a sort of quickly escaping vapor. I usually remember the first few words of my witty remark, but then I stick in placeholder grunts, hoping the rest of my thought will stroll by, but sometimes it doesn’t, and then I have to say “I lost it there, but it’ll come back.”

The young people give me a fond and indulgent smile and assure me it will come back, even though it won’t, and they know that by now. It’s embarrassing. But they’re so darn nice. “She’s slipping,” I see in their thought balloons, but you can see smiley emoticons in there too. I can’t refute it. The whole thing has led me to be a better listener, or look just like one. I don’t enjoy people witnessing my thoughts evaporate. Acting like I’m listening keeps me from looking as foolish, and is a good idea anyway.

I’m not actually listening. I am at first, but then I start thinking of something else altogether, usually a scene in a novel, or a reminiscence, or the state of the world, and my only connection to the conversation at that point is the attentive look on my face that I hope is still pointed in the correct direction. AND THIS IS WHEN I’M TALKING TO INTERESTING PEOPLE.

I’m not as embarrassed around people my own age. We’re all kind of a mess. True, in my case some of them watch my neurons failing to connect and secretly put it down to the beer, but they understand anyway. If it wasn’t the beer, it’d be something else.

There’s a theory going around among older people that this phenomenon has something to do with having one’s head so filled with wisdom that some of it needs to be off-loaded, and we have gained insight into what is important to keep and what is not. This is, of course, self-serving baldercookies. The fact is, if there were any more dead air in our brains our neurons wouldn’t even touch each other.

Me: “I’m trying to think of that word. You know, that word? That means, like, you really enjoy something, but it isn’t anything you did yourself.”

Yes. That really happened. Probably. I do write fiction. It’s either real or it’s not, I don’t remember.