My recent musings in which I implied that salamanders are the crown of Creation were not meant to state anything that wasn’t already obvious. I mean, look at them. But it got me to thinking about a scientific maxim I learned in college: ontology recapitulates phylogeny. It’s a dense phrase. It is, of course, designed to make people feel stupid, then defensive, then irritated at smartypants elites, then prone to making snide references to Obama and his “faculty lounge” as though educated people should be scorned, and before you know it they’ve voted in a bunch of scoundrels wholly devoted to getting themselves and their friends rich enough to buy out God. So probably the phrase should be retired.

But what it means is pretty cool. The idea is that in the course of developing from egg to embryo to fully-realized critter, we exhibit the stages of our own evolution. We start out sort of wormy, then begin to sprout the accoutrements of our species, reabsorbing our tails and fattening our heads and whatnot. Mom’s a little uncomfortable in the second trimester when we go through the triceratops phase, but things smooth out. It’s a very attractive notion. It was first proposed by Ernst Haeckel who drew a picture of the various embryonic stages, pointing out the early salamander. That’s the hook, right there–who wouldn’t want to claim a salamander in her heritage? I’ve noticed that most people who have looked into their own genealogy have been able to trace back to Charlemagne at some point. We like to think well of ourselves. This just ups the ante. 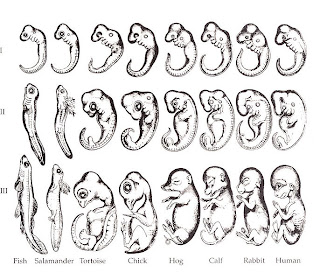 Trouble is, apparently it’s not true. I am old enough to have learned it in school, but it’s not true. I also remember looking at a world map in fifth grade and all of us kids pointed out what is perfectly obvious: it looks like the Americas had somehow split off from Europe and Africa. We got on our tiptoes and reached up to trace the map, our voices rising in excitement. The teacher smiled at us indulgently and shook her head and began talking about our delightful imaginations and segued right into something about Santa Claus that we also didn’t want to know.

So she was wrong on two points, if you include Santa. But that’s science for you. We don’t always get things right, but eventually the weight of evidence is brought to bear, and minds are changed. Sometimes it takes a while, because scientists are human too, and they see what they want to see.

That’s one of the differences between science and religion, at least the ones that purport to know something. It’s hard to knock a good religious story off stride. Once we’ve got a good narrative going, we don’t really want to examine it too closely. An Iroquois succumbing to deadly curiosity could march all the way around to the bottom of the world and back around to the top and approach the shaman and say, “you know? I checked, and the world really isn’t balanced on the back of a turtle after all,” and that will be the last sound you hear before the thunk of his severed head hitting the ground. For a lot of recorded history, curiosity killed a lot more than cats.

But I’m a curious soul, and I have to go where that leads me, rather than where I want it to. I’m really sorry I didn’t get to spend a fetal week as a salamander, but that’s life.

All the splendid portraits in this post were made by Nina Harfman over at Nature Remains. She’s a great photographer with some sweet subject matter and she’s pretty dang limber, too.