Every House Has A Story 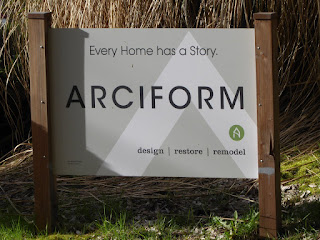 “Every home has a story,” according to a local architectural firm. They specialize in maintaining integrity of historical houses and that’s why they talk about a house’s story so much.

Our house has three stories, if you don’t count the basement. There’s not much of historical value to it, even though it is quite old by Portland standards. Of course, Portland standards for antiquity are pretty pale. By the time anyone rolled off the Oregon Trail and fetched up at the confluence of a pair of major rivers, they were too busy knocking dust off themselves to build a house. There were people here long before the 1800s but they weren’t white, and so they don’t figure into history. We have a mere handful of white-people houses that were built here in the mid-1800s. Since every one of my great-grandparents was plenty alive at the time, it doesn’t seem that long ago to me.

My sister Margaret bought a perfectly ordinary house in the Maine countryside that was at least 175 years old. Nothing much holding it up but spiderwebs and stubbornness. It’s not a distinguished place. Like a lot of other Maine houses, it started small and then various crappy rooms were scabbed onto it over the years. You just keep stapling stuff together and throwing a roof over it until you can reach the shed without going out in the snow. It’s got funk shui. But still, there’s nothing in Portland that old.

You want old? You want stories? Our friend Linda lives in France in a beautiful stone rowhouse, and it dates back to the 1400s. One day her husband Tom was in the back garden observing the shared roofline and they couldn’t figure out what was below one section of the roof that they knew had to be theirs. They ended up punching a hole in the wall and they found an entire room they didn’t know they had. Might’ve been a safe house in World War II. In Portland your house doesn’t have to be all that old to be historical. It just needs to be associated with someone who made it big in lumber, say, or moss futures, and maybe got his name put on a grade school.

Lots of houses here make the list that aren’t even as old as my dad would be. And ours goes back to 1906. According to the official records, it was built in 1926, but that is not true. Mrs. Kraxberger said so.

Mrs. Kraxberger showed up one day with an Instamatic camera in the company of her bored great-nephew when it was his turn to ferry her around. She grew up in the place, she said. We ushered her inside. We’d been doing some renovation. Dave had recently attempted to find the studs in the kitchen walls, finally giving up in aggravation and ripping a gash all the way through with a circular saw or a chainsaw or possibly a small nuclear device. There was no rhyme or reason to the studs. Two would be twelve inches apart and the next one would be yards away. Windows were hung from the ceiling joists. Truly hung: no studs underneath. Dave had been yelling about it for weeks.

Mrs. Kraxberger was four-foot-nothing before she got osteoporosis, and she snapped a bony grip on our kitchen counter and peered up at Dave, who was trying his darnedest not to loom. “This room used to be the entire house,” she croaked, speaking of the single-story kitchen everyone assumed had been an addition. “My father built it all by himself. And do you know,” she went on, proud as anything, “he didn’t know the first thing about construction?” She beamed. Dave nodded madly while trying not to let any words leak out. 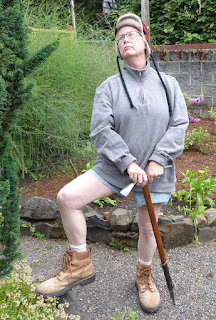 So the kitchen had been the whole house, and Mrs. Kraxberger’s parents lived in it, and the kids lived in a tent in the front yard. The larger portion was added a few years later, and the second story got dormers in 1926, which is when the city caught wind of things.

Recently I discovered the house addresses had undergone a change in 1929, and I found out what our address had been previously. A short internet search later turned up a Miss Jane Farrelly who lived in the house in 1919. Her sister had married a Kraxberger. Miss Jane Farrelly was a member of the Mazamas, a prominent hiking club here. You have to have climbed a major peak–Mt. Hood, or Mt. Adams, for instance, or Mt. St. Helens, which used to be majorer than it is now–to be a member. 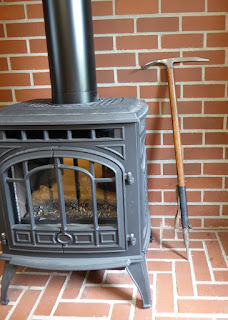 Suddenly a light flickered onto a sepia-toned past, and Miss Jane Farrelly appeared before me, grinning and squinting into the sun, leaning on a wooden ice axe, all woolen knickers and sweater and lace-up boots and verve.  Miss Jane later moved to an army base in Alaska and died, never having married, in 1941. I like Miss Jane a lot. I have an old wooden ice axe I keep in the old part of the house in case her ghost shows up. Every house has a story, and ours has a good one, even if I have to make most of it up.