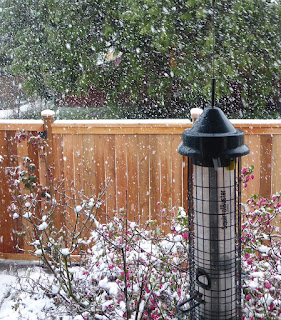 So, it was snowing. There wasn’t any way anyone could have predicted this, and maybe it was really fluffy rain, or possibly a Democrat hoax to make the weathermen look bad.

At any rate, whatever it was doing, it didn’t look like anything I wanted to walk around in. The Hoax People say I shouldn’t be walking around anyway. We’ve got enough food for a while if we’re not too precious about the quality of it. We’re probably going to find out what those mystery packages in the freezer are. Two of them are sort of yellow and we can’t offhand remember any yellow meals we had that we liked.

It’s been a weird few days. Not long ago I thought we’d finally gotten Joe Biden off our shoes but he has bounced back in a big way. I had thought Elizabeth Warren would have appealed to a lot of people who were torn between Biden and Bernie but evidently her voice is too high and she is too forthcoming about her plans. Bernie is much better about having the same ideas but not getting into the weeds with answering questions, and Biden is much better about saying things like Now is the time and We must move forward ahead together by cracky. I was terribly disappointed about Warren and slumped for a few days like a hypochondriac in a pandemic, but I’ve recovered.

And that is because I finally realized it isn’t all that important who our figurehead is. We have had a real fine group running for office and many more already elected who are doing good and brave things. Anyone who thinks the parties are all alike at this point would have trouble deciding between a pillow-top mattress and a hill of fire ants.

So what we have now is a team. With a lot of all-stars on it. Biden himself, I recall, impressed me a good deal in one of the debates in 2008. And he is by most accounts a decent guy. It is not the worst thing in the world that he is too moderate for me. And that is because of the other thing I realized: if I had gotten my dream candidate in there, she wouldn’t have been able to get the things done she wants to do. She could move things in the right direction, but she would face virulent and massively-funded opposition. Same thing with Bernie. There is no Democratic Socialist fairy. But there is the power of our numbers and our fervor, if we quit sulking and use it.

Those are our marching orders now. If Biden is our candidate, we get in there and let all our representatives know we support them when they fight the plutocracy and their hired vermin in Congress. Let them know we have their backs. The platform of the Democratic Party has not yet been assembled. Pick a plank and grab a hammer.

And if you are one of those idealists who is crowing about how you’ll leave your ballot blank if you don’t get your man? I’m going to guess you’re a child. A white child, with no personal skin in the game, who is in a position to ride out someone else’s storm.

I know how dismissive this is, and I happen to agree that Boomers have made a hash of things and deserve your derision (although you’d have been the same way)–but there is something that old people have earned just by staying alive, and that is perspective. We’ve seen this show before. We were idealistic too. We haven’t given up our ideals, either, but we understand it takes longer and more sustained work than one just election. We’d like to keep all the fossil fuels in the ground starting yesterday too, but it’s not going to happen merely by winning the vote. If there’s any hope for it at all, it’s going to happen by some cataclysm out of our control that will–much later–be seen as a blessing. A virus that shuts down commerce and transportation. A mass famine. A small asteroid.

But that doesn’t mean it doesn’t matter what we do. Try to imagine where we’d be if Gore had won in 2000. We wouldn’t have started a war in the Middle East. We would have started to turn the climate ship around. The billionaires would have done their damnedest to prevent us, and we wouldn’t have gotten enough done, but we’d be a lot further ahead. This is no time for petulance. Hold your nose if you must but vote for the Democratic candidate for President. Don’t think of it as voting for some old fart. Think of it as voting for Biden Bernie Warren Harris Buttigieg Yang Abrams Inslee and Klobuchar. It’s a damn fine group.