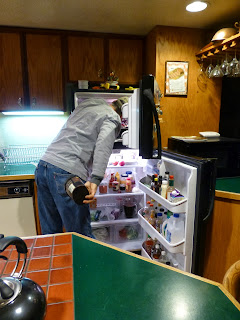 Fiat Lux. That was the motto for my college, where “Liat Fux” was a perennial graffito. It should have been Dave’s motto: let there be light. Dave’s a huge fan of the light. He’s a switch flicker. We go back and forth on this. He’ll go through the house flicking on light switches and leaving them on as he leaves the room. It’s as though he has this huge personal halo effect. I, on the other hand, prefer to bring darkness upon the face of the deep.

It’s not just that I turn off the lights when I leave the room. If I enter a room that has a light on, I judge it has already had plenty enough light already. I give the room a quick once-over and then turn off the light, and then enter it. I know where I’m going. The bed is over there, the closet is to the right, and one more turn will bring me to the potty. Who needs light? If I’m going to check the front door lock before I go to bed, I’ll creep through the darkened room until I can feel the door handle. It wouldn’t take much to pop on the light, check the door handle, and turn the light off again, but I never do it.

So whenever we leave the house of an evening, we have this duel. Dave turns on the hall light and the basement light and maybe one or two lamps in the living room. His reasoning is that people will think we’re home and they won’t bust in and steal our TV. Plus it won’t be all dark when we get home. Seriously? I say. We need to have the lights on for three days just so we don’t have to feel our way three feet to a light switch when we come home? What, do you think electricity just comes pouring out of the walls? (There is some evidence for that.) Here’s the real scoop. If you come upon our house at night and the lights are on, we’re not home. If NO lights are on, I’m home alone. If the kitchen is aglow with

the light from two open refrigerators, Dave’s home alone. If you knock, he’ll totally make you a sandwich.

He will. I should be fair. There is another element to Dave’s urge to illuminate. He has a fine consideration of the needs of others, and a broad notion of who those Others might be, and they might include resident chocolate Easter bunnies he couldn’t bear to chew the ears off of, various of Tater’s toys, and certainly Pootie, for whom he will leave the TV on if the Lakers are going to be playing, after making sure it’s on the right station. When he turns out a light, he can sense that somebody somewhere is going to be disappointed.

So one night I went upstairs to put on my jammies. The bedroom was dark. This is not a problem, because I know where I’m going. I take three steps into the room and suddenly there’s a horrible clatter and shriek and I’m on the floor with a big stick jammed in my abdomen. I’m pretty sure I’m mortally wounded. There’s an exploded spleen in there, or a mashed gall bladder, or a grievous intestinal intrusion. I roll on my side and probe for blood and eventually I decide I’m going to live after all. There is a chair on its side next to me. I had tipped it over and fallen belly-first onto the leg of it in one motion. I hobble downstairs clutching my gut and briefly explain the incident. And we’re both paralyzed. 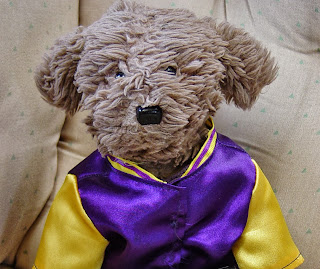 There’s blame all over the place and nowhere to assign it. Dave has left a chair under the smoke alarm from having changed the battery. If I had flicked on the light I would have seen it clear as day. Dave wishes I would get in the habit of flicking on lights, but on the other hand he knows he probably should have put the chair back in its place right away. I think he’s done the Lord’s work changing the battery, but on the other hand I’m the injured party. We’re stuck in perfect blame parity. The only solution is in the beer fridge.

It’s a classic standoff. It’s a little like the Democrats vs. the Republicans, locked into positions and unable to move forward. Only in that case, one party balks at turning on the light and the other has excavated a pit in the bedroom and lined it with broken glass and wolverines. Other than that, same kind of deal.

I would like to state that neither Dave nor I is as extreme as I have depicted in this post, except me.