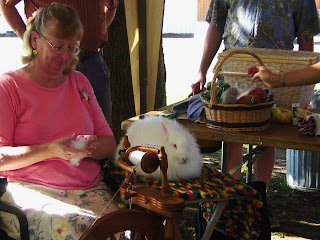 Ruth wanted to know if I wanted to go to the Flock and Fiber Festival, and I thought, sure, why not? I had to get the car out to go to the flockin’ grocery store anyway. So off we went.

The Flock and Fiber Festival, on the Canby fairgrounds, was a celebration of wool. There haven’t been so many people spinning in place since Woodstock. There must have been a good hundred people sitting about spinning fleece, including one woman who was spinning while plucking fuzz from a slowly diminishing rabbit. It was a particularly dramatic demonstration of source-to-end product, with rabbit socks being knitted right next door. Technically speaking, of course, rabbits do not bear wool so much as a sleek acrylic blend. 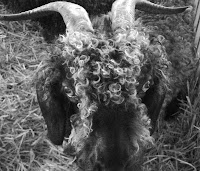 In fact, virtually everything involved in the production of fiber products was on display here, from the animals they shear to the tools of production to the products themselves to books written by my very sister. The only thing missing was a diorama of my closet, where tiny shrunken sweaters go to be perforated by moths. That would have closed the circle.
There was a barn filled with highly decorative sheep and goats; just to see them was to be struck by the bounty of products that might be made of them. Mittens, scarves. Sweaters. Sausage. Maria, my massage therapist.
The most active ones were in a small pen against which 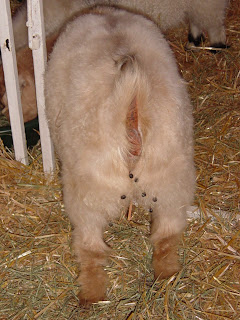 someone had unwisely leaned what had once been a nice leather satchel. Mostly, they were very well behaved, perhaps due to the proximity of the sausage booth. Many of the animals were in competition for ribbons, and I assumed there would be a frenzy of goat-sprucing or sheep-fluffing going on, but it was not the case. You just had to lead them out there with whatever they’d rolled in still on them. In some cases, with whatever had rolled out of them still on them. Consumer alert: steer clear of the fleeces that come with their own novelty sweater buttons. 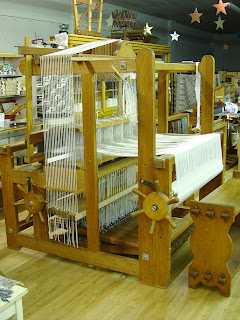 My companion Ruth has her own weaving studio. Scores of looms are set up in one room, and they look from a distance like naked upright pianos. One large one with foot pedals could have been a pipe organ. She can go in there any time she wants and make music out of wool, because she knows how.
I don’t know how, so my wallet is in no particular danger at the Flock and Fiber Festival. Someone was selling salted filberts (sold!) but mostly people stayed true to theme. There would have been no reason for me to come back the next day, but I did. Because when I die, I want it carved on my gravestone that I never missed an opportunity to see a duck-herding demonstration. 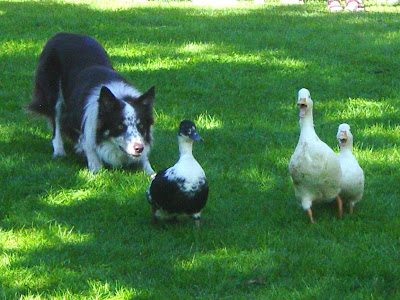