For Love Of Country

We’re 243 years along on this experiment in liberty, a little late to learn it is traitorous to take a knee in peaceful protest, or stand quietly during our anthem, or fail to wear a flag pin in our lapels, or abandon any other symbol of patriotism-on-the-cheap. We are told we disrespect our troops. “I hope you sleep well tonight, under that blanket of freedom our men and women in uniform have won for you,” a man sneers, trotting out a road-tested narrative from the think tanks of our overlords.

It’s repeated so often–that our brave men and women are dying for our freedom–that a huge swath of the population never stops to question it. But the undoubted courage and sacrifice of our soldiers has often been in service of anything but freedom. 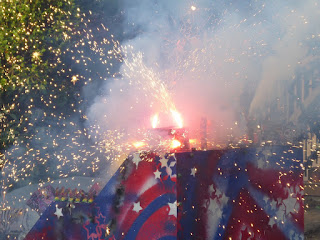 The War of Independence was surely a fight for our freedom, back when we declared prematurely that all men are created equal, but successive armies were put to the task of extinguishing the Shawnee, Cherokee, and Choctaw, who, scientists now agree, were fully human even then. Certainly in the Civil War our soldiers, or half of them, fought for the freedom of slaves. Then our troops were mustered to isolate or destroy the Sioux and the Comanche, and more were sent to colonize the Philippines; and meanwhile, for the next hundred years, law enforcement in the former slave states enforced the utter subjugation of millions of people through murder and terrorism, leaving communities deprived of any property or wealth, with repercussions to this day. And even so, many of us still fly the flag of Jim Crow on our bumpers in the name of some fabled Heritage that should be our shame.

We fought the good fight in World War II, against clear evil, and then sacrificed many thousands more in dubious enterprises that have, whatever their rationales, failed to make the case for war over peace work. 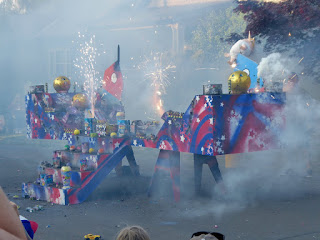 And now our leaders continue to sell us endless war by insisting our brave troops are fighting for our freedom, and we’re buying it. Oh, we’re paying through the nose for it. Our soldiers are paying even more.

Take Cheney’s War, cooked up under false pretenses, ostensibly to free the Iraqis from the authoritarian rule of Saddam Hussein–but then all attempts by Iraqi people to actually conduct free elections were quickly quashed by our forces under orders from an administration that saw its control of Iraqi wealth slipping away; and the rebuilding jobs, promised to citizens whose government jobs were taken away from them, were instead taken over by our soldiers, who were then supplanted by a new private mercenary army at unfathomably greater cost to US taxpayers but tremendous and ongoing profit for private firms like Halliburton and Blackwater. 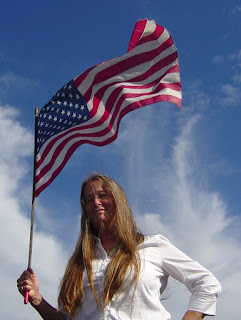 Our soldiers are fighting, and building, and dying, but not for our freedom. And if I take a knee, or remain silent for our anthem, it will be for them.  Or for anyone else whose freedom is threatened by the actions of my government.

Why dredge up ancient history? This is our truth, and not so ancient. A mature nation must not pretend its way out of it, or merely press a reset button absolving us of our bloody history while we still kill for oil, and declare war on refugees and their children, and demonize the innocent, and incinerate our gorgeous planet for money.

And yet now we are being told that we should not trouble ourselves over these issues, that the patriotic thing to do is cheer and lay ourselves out to be fleeced and continue to send in our brave sons and daughters to be sacrificed for someone else’s profit. That to do anything else is to disrespect our troops. No. I respectfully disagree.

There is a reason to glorify our bloated military, to declare it a sign of our strength rather than a failure of our ideals. And that reason is to baffle and bluster us into believing everything we do is for the good, and to distract us from the sins committed in our names. To say: look at these shiny jets, and this procession of armored codpieces-on-a-track, and don’t look over there at the war profiteers’ growing treasure, and the death and deception that feed it. 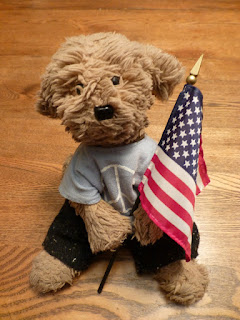 But we are a government of, by, and for the people, and anything our leaders do is done in our name, whether it is genocide, or enslavement, or pursuit of the happiness of CEOs at the expense of entire nations. We protest out of love for our nation and its highest ideals. We cannot simply climb aboard the Good Ship America and glide toward our lofty destiny. We stutter and stall and tack toward it at best, and we need all hands on deck.

But we still believe in our path and principles, and it is our highest patriotic calling to keep fighting to form a more perfect union, with liberty and justice for all. All.