For Unto Us A Child Was Borne 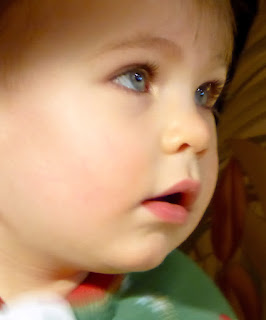 This was a special Christmas for us, because we had an authentic child staying with us–the real item, past manger-size but not old enough to know what Christmas is. Furthermore, it was a Grade-A button-headed toddlemuffin of a child with a freight of eyelashes and a disarming wobble. A real peanut. There’s no adequate defense against one of those.

This particular child belongs to a niece we distinctly recall as having been a child herself, only yesterday, but now she’s a genuine mommy and a wonder to behold. We had the privilege of their company for only three days, but I am left to puzzle how anyone accomplishes this mommy thing, because it can go on for quite some time. It requires a raft of patience and stamina and wipey-cloths, and it sort of makes me think I should have had more appreciation than I already did for my own mother, although, as I remember it, I was never a speck of trouble. 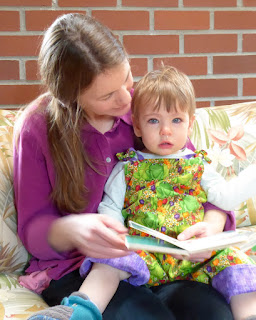 Because since the last time we saw this child, she has elected to stand up and walk around, and by gum that is what she wants to do. There is nothing in the house so interesting to her that there might not be something even more interesting around the corner. And as much as  it seems clear she is a bright child, did you know that you can’t trust the little bugger to keep herself alive for one second? You have to follow her around all the time. There’s no “Mommy’s going to shut her eyes for a moment so be good.” No, she’s going to throw herself down the stairs or touch fire or eat glass just the second she gets a chance. 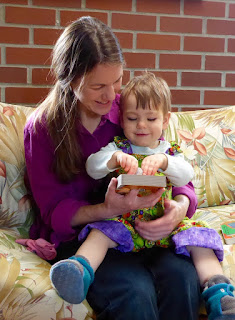 And by “you” following her around, I pretty much mean Mommy.  Sure, Dave and I did some toddler-following, but by far the largest share of it was by Mommy. Mommy who is a walking maternal Swiss Army Knife of pertinent items, her pockets bristling with binkies and string cheese and toddler kibble and pacifiers and baby-mops. Mommy who swings that baby onto her hip like it’s a potato chip, and does it twenty times an hour, even though it actually weighs a thousand pounds. And Mommy herself looks to weigh about a hundred pounds soaking wet, which by the way is the condition she is most likely to be in. Babies are leaky. Did you know that? They’re squirting every which way. There’s usually a pacifier around but that only plugs one of the holes, and meanwhile the rest of them are churning away more or less continuously.

This is especially true if the toddler in question is a little sick, which this one was. Poor little bean was running a bit of a temperature and making with the occasional petite cough and adorable sneezle. No matter: her joy and good cheer were distributed with equal generosity, as well as her virus in the form of a fine green mist with intermittent chunkiness; Dave took a direct shot to the open mouth, which is not fair, because of course you’re going to be bent over a baby cooing, they know that. I wasn’t worried. I figure babies get sick because of lack of exposure, but we’ve had time to get most of the viruses already.

So when my own temperature spiked, it gave me plenty of opportunity to appreciate that if I were a Mommy, I’d still have to be tending to my baby, even though I was pretty sure I was not capable of any such thing, or even washing or feeding or wiping myself. My hair hurt. Dave trotted off to the store to get me orange juice and he cleaned up the house and made me soup. He has always basically been a very good Mommy in a big fur suit. I don’t like to push it, but I thought about crapping my pants and seeing how that goes. 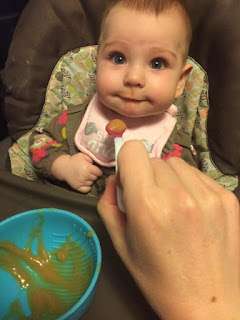 Upon sober reflection, would reasonable older adults willingly let a Trojan horse of a contagion bomb into their house again just because it’s this cute? Oh yes indeedy. In a hot, fevered heartbeat.