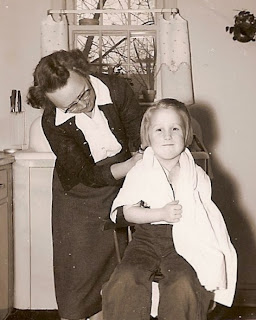 I don’t remember many dark moments in my childhood. Mom was a pleasant, smiling, patient woman in a calico dress and apron who smelled like bread baking, and at least once a day she would give me a big hug and call me her sweetie-pie sugar-plum honey-dumplin’ puddin’-head, all in a row like that so she wouldn’t forget any of it, and she sang You Are My Sunshine to me, and let me lick the beaters, and once I’d been lulled into a position of complete trust for seven years, she pinned me down in the kitchen and gave me a Toni. It burned and smelled like curls and cancer and nothing in my life had prepared me for my mother trying to fry off my head. My straight hair was unceremoniously abbreviated every couple months, and Mom evicted it from my forehead every morning by raking an all-day Barrette Of Death across my scalp, but I’d gotten used to that. The problem, as she saw it, was that I wasn’t enough like Shirley Temple. There was never a chance I’d be able to tap-dance, either. Even when I tried to skip, it just looked like my knees had the hiccups.

The Toni was horrible. It didn’t last long, but I was mortified. I wasn’t interested in anything girly. I died a little inside whenever Old Man Balderson next door called me “young lady,” which he always did, thinking himself nice. I briefly owned a single neglected doll, a gift from a distant aunt who didn’t know me well, but that was it; I played with stuffed animals and real frogs and salamanders. That awful Halloween when the girl in the pink princess outfit got a prize for Prettiest, it struck me as an outrage of cosmic proportions. Just the idea that “prettiest” should be a category was wrong. What kind of mixed-up world was this? 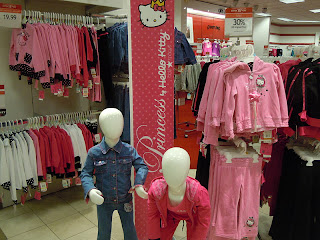 Clothing was strictly utilitarian. In fourth grade, I picked out a drab blue school dress that I liked well enough, and my parents did too, so they bought the exact same dress in brown also, and that plus the Bluebird outfit was it for the year. It would still be several years before I recognized that the two dresses, and I, were totally inadequate. Kids today are much more advanced, and pick up on humiliation at a much earlier age. A stroll through any girls’ department these days will reveal aisles of unrelieved pink froth and Spandex, and your only choice is spangles or not so many spangles. And apparently they like it. I would have died. 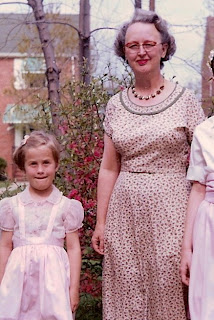 So I guess my aversions made me a tomboy, except that I couldn’t run, climb, throw, fish, or do anything else in the tomboy canon except fall down, scrape skin off myself, and feel squirmy in my Sunday best. I was a happy little girl, Mommy’s sugar plum, and I was fine just the way I was. Until I got to junior high school, and learned that I was not fine just the way I was. In fact, I wouldn’t do at all. There would have to be some big changes made. When cheese goes through the grater, it all comes out the same way, and if I didn’t want to be a little autistic cheese molding on the back shelf, I would have to press into that metal, even if it hurt. 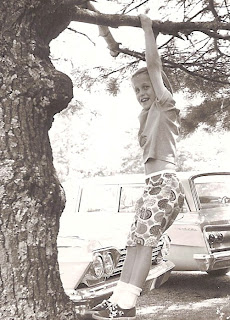 I hesitated at the door to adulthood, as though it held a gibbet. I was only eleven, but I could see my future clear as a teardrop: to step forward was to step away from my authentic self. It was going to take guile, and trickery, and concealment, and a little more money than I had. One day I blurted out to the prettiest and nicest girl in school that I didn’t want to grow up, and she said she didn’t either. But I didn’t want to have to do it. I just had to do it.

I wasn’t very good at it. Fortunately a few years later the flower-child era was ushered in to match my budget, and I got by on jeans and work shirts and too much eye-makeup, which my parents did not approve of. They thought it made me seem like a whore, but it didn’t. It was the sex that did that. The makeup did look dreadful. I only have eight eyelashes and it takes a herd of mascara to get them to show up. Plus, my eyes are tiny and set too close together, which is not what you really want to draw attention to. There was always the option of painting the outside corners to show where my eyes should be, but the effect is much like what the City gets when it spray-paints around the little potholes it doesn’t have enough money to fill in yet.

I carved out a tiny social niche and had just enough self-assurance by my senior year to recognize the opportunity to quit wearing makeup when I went off to college. Women think they look like hell without makeup, and they do, if you’re used to seeing them in it and they show up without it one day, but if they never wear it they look just fine. So I went to college scrubbed up clean and haven’t used any cosmetics since. I have to date saved $132,000 in spurned makeup, enough to have bought every child in Bolivia a heifer, but I spent it on beer instead.

The best thing is, I can see my authentic self again from here. It’s a little scuffed up, but it’s coming into view.