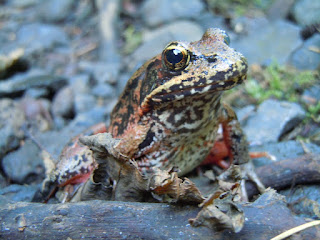 It’s a damp and pleasant night, and I’m plucking a perfect pink frog off a curtain of landscape cloth and placing her in a bucket. Which naturally puts me in mind of the Great Gilchrist-Crescent Spaghetti Feed of 1989.

We are trying to keep the frogs from crossing Highway 30 on the way to their annual Spring Fling in a vernal pond. On our data sheets we refer to this as “assisting” them, which is not the verb the frogs use. In fact the case could be made that they lack appreciation.

We’ve got a slick system in place now. Our team has rigged up a temporary fence with landscape cloth to intercept the frogs before they cross the road. It’s a thing of beauty and was engineered chiefly by Anne the Magnificent, who has imagination and ingenuity and, ever since the election, plenty of time to think about things in the middle of the night. It’s a working wonder of rebar and old fence insulators and washers and string and clamps and pebbles and probably tractor innards and old hoof shavings and whatever else she could scavenge for free from her daughter’s farm, and it works like anything.  Add in Maggie’s contribution–sewing eight hundred heroic feet of rope in a channel on the bottom of the landscape cloth for weight–and us frog wranglers, and we’ve got a well-oiled frog-plucking machine.

But it’s not as much fun as it used to be.

Before, we were scampering after the lusty hoppers all over the road and chasing them on the shoulder and clambering up to the railroad bed to coax them off the ties and scoping out their eyeshine on the berm and pointing and squealing and having us a fine old time. Lordy, it was invigorating. The hours go by like minutes when you’re frog-wrangling aerobically.

But of course we missed some of them. And it isn’t really safe to dash around a road in the dark. And the railroad company’s legal department was pretty particular about us not getting near their tracks. So great minds got together and produced this slick new system. And now we stroll the length of the cloth curtain like church ushers with a collection plate and scoop up frogs as we go.

No more Gilchrist-Crescent Spaghetti Feed for us.

Oh, that! It was 1989. It was only the second year of the Cycle Oregon bicycle tour, before they’d ironed out all the kinks. 2,000 bicyclists were provided with campsites and luggage transport and dinner and water, but for most of the day we got a banana and a spank on the Spandex for luck and sent off for our ride. Any minor diner we came across during the day was stacked all around with bicycles eight feet deep and packed with cyclists, a wide-eyed waitress and a panicked fry cook. Little kids who set up cookie stands on the side of the road got cleaned out in minutes no matter what they charged. When we arrived in the logging towns of Gilchrist and Crescent, we were prodded toward the Grange Hall, where long tables sagged with homemade pies for sale–hundreds of them. We dispatched them like locusts on a corn crop. Then came dinner. Gilchrist-Crescent was ready. The community center was well-staffed and every large pot in town was set to boiling. Someone ladled tomato sauce out of a vat and everyone in town knew how many people to expect and how much spaghetti constituted a logger’s portion, but they were not familiar with 100-mile bikers. The garlic-bread distributor blanched at her dwindling supply and cut us down to a half-slice each. Progress in the line slowed and then ground to a halt as pickup trucks peeled off to nearby towns for more boiling pots and spaghetti. Those of us still waiting for dinner made a shoulder-rubbing conga line and sang ‘Sixties hits and put our left foots out and put our left foots in, and a fine and raucous time was had by all, even as the G-C womenfolk were living out their worst nightmares. It was like that all week. All 2,000 of us continued to vulture our way through miles of rural Oregon leaving behind a cleaned carcass of exhausted and astounded residents and a fair amount of money. It was grand.

But it would not do.

Cycle Oregon felt a bout of organization coming on, and got out its pencils and spreadsheets and calculators and thereafter delivered a precise and reliable 7,000 calories per day per person. Roadside cookie-stand business slumped. Waitresses waved from diners. Not many cyclists dropped dead. Order was restored.

It’s 2017, and smashed frogs and starved bicyclists have been reduced to an acceptable minimum. It’s a good thing. It’s efficient.

It’s just not as much fun.