From Here To Totality 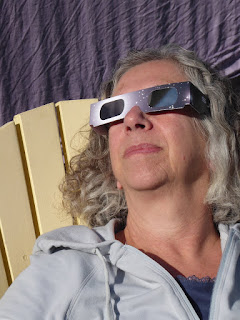 Let the record show we were on to it first. First, I say, and everyone else should get in line. By “we,” of course, I mean my friend Linda, who notified me well over two years ago that there was going to be a total eclipse of the sun right handy-by, and that she was going to come out and watch it with us.

Not a lot gets by Linda, so it’s good to travel in her wake. If there is a beetle in the natural world with a roof rack, pop-out cabinets and a convertible dinette, Linda has already read about it. If there is a sea creature with expandable tentacles for parachute capability that lures minnows by secreting vanilla pudding out its blow-hole, Linda will find it and send me a link. Linda can detect minor asteroids with her aura.

So this eclipse has been on our calendar a long time. “Great!” I said. “We’ll do a little hiking, cook up a few nice meals, and the morning of the eclipse we’ll pop down south a ways and soak it right up. Totality is only forty minutes away.” Plans were later refined to get a slight jump by going to our cabin the night before, from which Eastern Oregon, with its more reliable sunshine, is but an hour’s drive. We’ll wander out to Madras, lean up against the fender, and have us a time. This was Linda’s eclipse as far as I was concerned.

And then this eclipse got internet all over it.


Suddenly we are on the cusp of All Hell, and it’s fixin’ to break loose. One million people are slated to travel to Oregon just to see this sucker. Off the coast, the Cascadia Subduction Zone, leery of being upstaged, is sensing an opportunity to drown 300,000 tourists all at once. Inland forests and grasslands are expected to burst into flame from sheer anxiety. We are solemnly informed that allowing five hours to drive fifty miles is far too optimistic, and that if we really want to be in the path of totality, we should leave just before dawn four days ago. We should pack a cooler of water and sandwiches and a Bug-Out Kit with supplies to last three weeks including green-bean bake, freeze-dried protein pucks, astronaut poop bags, prescription medicine for ailments we don’t have yet but which run in the family, a Glock, and a selection of luncheon meats. We should run through the list of personal friends that own helicopters and favorite them in our phones.

Meanwhile, astrologers have been working overtime to produce Content. Because this, that, and the other thing were mysteriously lined up when Donald Trump was born, we are warned that degrees were activated and are likely to be reactivated during the eclipse. A careful study of nearby celestial bodies, some of which have malevolent intent, reveals that something perfectly awful involving the president might happen soon, so watch out.

[Forewarned is still forescrewed, though.] 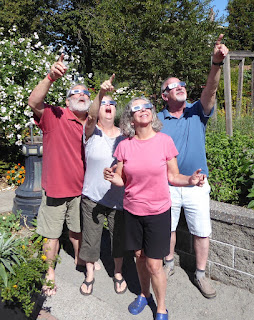 People who can’t even get their Chevy to pass a National Guard water truck naturally ascribe great power to the moon passing in front of the sun. One fellow has advertised for a woman to conceive a baby with during totality. Such a child would be born to two parents who believe the universe is playing billiards with its matter-bits and who possibly shouldn’t be trusted with a ballot; but confidence can get you a long way. For instance, this guy is pretty dang sure he can hook up with a random ovulating stranger and get the job done in a couple minutes, and I think he can, too.

Linda and I and our buddies Max and Peter are going for it. We’re all in. If you don’t hear from me by Wednesday, send someone out to paw through the charred-out remains of a mid-size rental car near Madras. It might smell like green-bean bake.