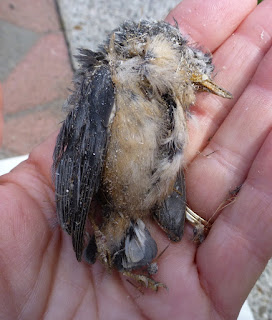 Dave the nuthatch finally quit coming back to the nest box, finally quit beeping from the branches, finally moved on. He’d help raise at least two babies, and at least one of them might not have been impaled on a scrub jay. There might have been more. Don’t know.

Or I didn’t know, until last week, when I saw Marge and Studley Windowson, our chickadee buddies, checking out the box. It seems late for them to start a brood, but I got excited. I called Dave the Man, whose job it is to clean the nest box. He took it out to the patio and uncombobulated the roof of the box and looked in. Bunch of sawdust and wood shavings. Nothing like the soft mattress the Windowsons set up every year. And what’s that? 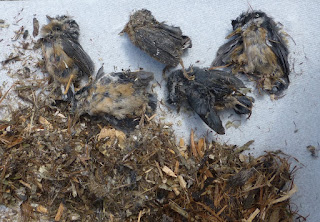 Five dead babies? Five. All feathered out but smaller than the two that actually left the nest. They were probably one or two days dead by the time the successful ones took off. And now it was over a week later. They hadn’t yet turned to goo, but I couldn’t tell much about cause of death. Could be a lot of things, I guess. The world, it must be said, conspires against baby bird survival. 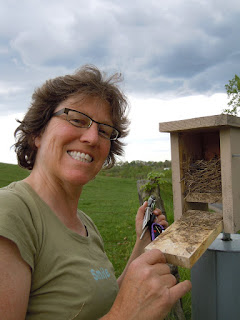 But I know who would know. Julie Zickefoose would know. There is no one on this orb who knows more about baby birds than Julie, and that happens to be fact, not hyperbole. That is why she wrote a book called Baby Birds: An Artist Looks Into The Nest. How do you learn so much about baby birds? Why, you monitor their nests, and you slip a hatchling out for a quick watercolor portrait, from nose to nubbin, once a day until they’re grown. No, I wouldn’t have thought of it either. And neither has anybody else. It’s a first. And it happens to be true that if you’ve taken the trouble of painting something accurately in watercolor, you have observed the living hell out of it. You know stuff.

Julie gets in there, spirits out a little baby to paint, scrubs behind its ears, makes it a mealworm meat sandwich with the crusts cut off, picks up its poopies, checks its math homework, opens up a college fund, and snaps it back in the nest before its real mom has time to do a second count. And she does it every day until they fledge. The changes she records are jaw-dropping. It’s like if you have a baby and in twenty days it’s bearded, six foot tall, out the door, and already plotting to move back into the basement. 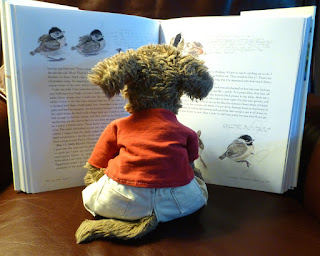 And in the course of this project, she saved the day for many of the broods. One thing I’ve learned from her book is that it is a sheer miracle any bird ever makes it to adulthood. I may feel real bad about Dave the nuthatch, but these tragedies are happening all the time all over the place. It’s a jungle out there.

House sparrows and house wrens are a particular menace. The taxonomists say they’re not closely related, but they are: they’re in the Asshole Family. They’ll go in a nest and spindle the eggs or even perforate the babies just for something to do of an afternoon.

So Sheriff Julie blasts in and routs them. Relocates snakes. Thwarts raccoons. Pulls entire nests out for a quick pop in the microwave to kill mites and puts them back again. It’s got to look like a miracle from the birds’ standpoint: everybody’s all itchy, then the Mighty Hand Of Julie reaches in and removes their bedding and puts it back all spanky clean. Basically, Julie is Bird God. She smites the mites, she visits devastation upon the enemies, and lo, she is with them always, even unto the migration. She doesn’t save them all, but it’s not like the Bible one has such a great record, either.

So if you want to find out exactly, and I mean exactly, how you can make an entire working bird in a few days starting with an egg the size of a Tic-Tac, and you do–you do!–check out Julie’s big, beautiful book. She’s got all the portraits of the birds through all the stages from loogey to fuzzball. You will be amazed. Besides, if you buy this book, maybe Julie can top up all those little college funds. And buy herself sumpin’ pretty.