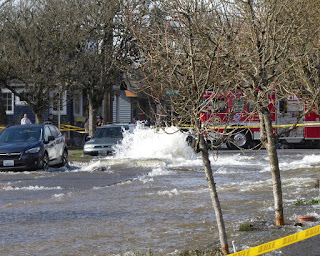 Dave and I are both pretty good noticers. So when he stands at the front door and says “Huh. Now that’s something you don’t see every day,” I will haul my butt over and have me a look. It could be crow antics. Could be a cool bug. This is Portland: it could be a naked woman juggling hamsters on a double-story bike.

“Huh,” I agreed, standing at the front door. 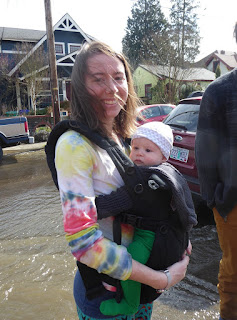 A river was running down our street. Canoeable. There was police tape at the intersection. And firemen all over the place. Global warming promises to deliver extreme weather events, but they’re not usually this localized. A party atmosphere prevailed. The couple across the street had bundled up their infant and were headed south, or as we refer to it now, upstream. “Going to check it out?” I asked, and they said No. They were going around the corner to T. C. O’Leary’s for a beer. Before noon. As they reasoned it, St. Patrick’s Day was only a day away, and there was no point risking the water would rise and they’d miss it. 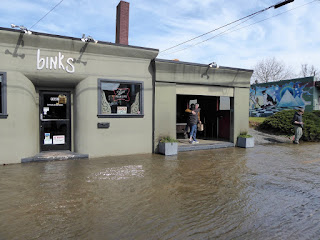 I put on my leaky rubber boots and headed out. I don’t own any boots that keep me dry in two feet of water anyway. If I did, I’d dance on a stage.

All up and down Alberta Street, the consensus was that this was an even better show with a beer in hand. Galleries were empty, bars were full. 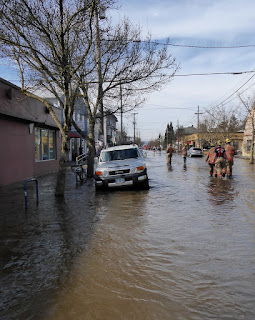 A thirty-inch water main had busted up at 23rd and Skidmore and was busily mapping out the relative elevations of the Alameda Ridge. I knew we weren’t quite at the high point–in fact the water main probably was–and if you continue north about four miles you hit the Columbia River, which is, by definition, the low point of everything. That was another thing Dave noticed once. We’d lived here a few years by then, and he was standing in the middle of our street and said how cool it was that you could see sailboats going by. He wasn’t on any meds at the time that I could adjust, so I joined him in the street and I will be dag-blasted if tiny boats weren’t sailing by in the distance. (He was also the one who noticed the day it was pouring rain in the front yard and sunny and dry in the back, and now, because of those two observations, he gets to pull my leg as hard as he wants, because every ten years or so he’s right.) 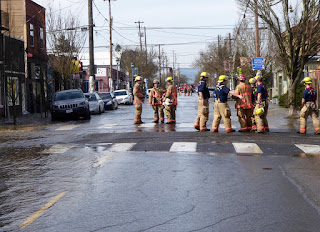 Before I gave up and submerged my boots–it only hurts for a bit–I asked one of the nice firemen for a hand up onto the relatively shallow sidewalk. It’s not like they were doing anything. Five thousand uniformed firemen and nobody offers to pick an old lady up off the street? He frowned at me. “Is there somewhere you need to be, Ma’am?”

In your arms, sugar. In your big meaty fireman arms.