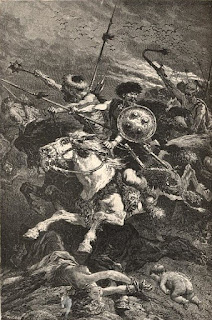 I just got my first Big Girl pneumonia shot. Evidently I have reached the magic age at which it is assumed I can’t afford a full-price movie ticket, and I’m likely to keel over in the presence of a microbe. I do tip over easily.

I woke up the next day feeling a little off, though. For instance, I got up at the usual time and took a dump but instead of getting dressed I went back to bed, just because. Long about mid-morning it occurred to me to take my temperature, and sure enough, it was up to 99.9. Right in the dreaded stinkhole! No, I took it orally. My shoulder was sore where I’d gotten the shot, too.

So, awesome. I have a case of miniature shoulder pneumonia. My bicep is hard at work fending off disabled microbes and frankly, I couldn’t be prouder. It’s like the Attack Of The Dead Huns! This would be a practice run. Somebody has dumped off a shipment of Dead Huns and all my personal warriors have run out to stab them with daggers just to get the feel of it so they’re not squeamish when the real thing arrives.

This is the sort of scenario you cook up when you’re running a fever and need to feel okay with it. You want to feel ready for the Huns.

So because there was laundry to hang out and dishes to put away, I spent the morning looking up the Huns. Huns are supposed to be fierce, like pneumonia. Turns out one of the first peoples the Huns attacked were the Alans.  The Alans. How hard could it be to beat up the Alans? Clearly, I needed a different visualization.

So. My shoulder is full of highly excited plasma cells. The little girl plasma cells are off somewhere trying to read and the little boy plasma cells are in my shoulder with a set of G.I. Joe antibodies, lining them up and going pew pew pew at the invading dead pneumonia microbes and getting all steeped in the culture of violence so that some day when they grow up they can go to war for real, and the girl plasma cells can get some reading done. Everybody’s yelling at them to keep it down in there, but that shoulder is going to be sore until they run out of G.I. Joes. 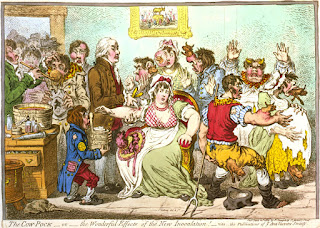 By the next day my fever is back to normal. The plasma cells have been instructed to put away their toy soldiers and register for Selective Service, and peace has returned to the body.

What a wonderful thing is the vaccine. Most of us remember that the first one was developed by an 18th-century physician who’d heard that milkmaids didn’t come down with smallpox, possibly because they’d been exposed to cowpox, but it’s not true. For one thing, it was probably horsepox all along. Also, the Chinese had him beat by 800 years. They did it old-school. They scraped smallpox scabs off of dead people and ground them into powder and made people snort it.

I don’t want to hear anyone complaining about modern vaccines again. Roll up your sleeves and your kids’ sleeves. We’ll come up with a cure for imaginary autism later.