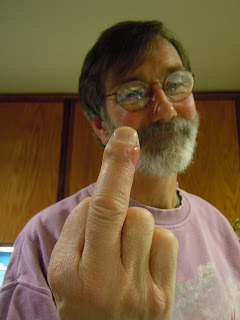 Dave’s middle finger just blew up. It had always been knobby since the day he mishandled a line drive and smashed the last knuckle to bits. But although that injury ended any career he might have had as a pianist, his finger has more or less behaved itself through the years. Until a few weeks ago. That’s when, for no reason, it started to swell up. It got huge and round and pink on the end. It looked like–well, it looked like he might be able to make a good living with it in the, uh, personal services field.

And it hurt. I could tell only because after the third day or so he casually mentioned that he was going to walk over to the emergency room with it. That means Kaiser.

We have Kaiser insurance because that’s what I had all those years and I liked it. Dave was always on Blue Cross and thought the world of it, but after we retired I had the better deal. It would cost significantly more to keep the Blue Cross. And all that stuff about Kaiser taking out the wrong kidney or sawing off the wrong leg, well, that hardly ever happened. 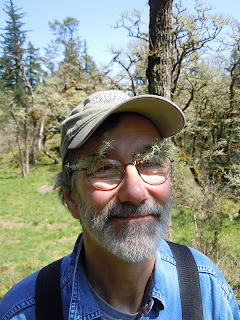 Basically, Dave is pissy about Kaiser. And there’s no reason to be. They’ve always done right by him, unless you count that time he had to get a big cyst drilled out of his testicle and they did an excavation and then he had to sit on an ice block for like three months and pop Vicodin like Tic-Tacs to keep from blacking out and finally he went back and said he really thought he should be feeling better by now, and could someone take a look? And someone did, and said everything looked just fine, implying he was a big whiner, except for that big cyst in his testicle, and maybe he should think about having it drilled out. So they drilled it out again, and did a thorougher job of it, and he was only out the two co-pays and a lost half-year  of happiness, or so, but still he brings it up. 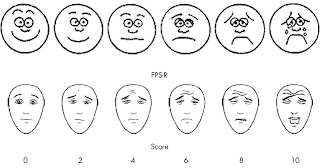 Kaiser emergency is only about six miles from home so he walked over there and went through the door, finger first, so as to get the most attention. The first person to attend to it was concerned. She handed him the Pain Scale sheet, with its Graduated Grimace illustration of pain levels, from a slight wince to a rictus of agony. “On this scale of one to ten, how do you rate your pain?” Bad question to ask Dave. If Dave had posed for the illustrations on the one-to-ten scale of pain, the face would have looked exactly the same for all ten levels, and then in number eleven there would be big X’s over his eyes. Dave drew a breath and delivered a treatise about the subjectivity of the perception of pain and the impossibility of determining anything useful from such an exercise when there was such a wide range in the abilities of people to withstand discomfort, and what is a pain threshold, anyway, is it something empirically measurable or does it reflect a level of stoicism or–let’s be honest–strength of character that has become sadly lacking in this pampered modern world wherein happiness is considered an entitlement?

She told him that maybe he could go home and take a couple of Tylenol and see how it goes.

So then stuff started happening right away. He was diagnosed with cellulitis, an infection so dangerous that there was a possibility of gangrene, brain fever, unsightliness, and several versions of death, and he had antibiotics introduced intravenously and someone lanced a tub of pus out of it and he was sent home with more antibiotics and Vicodin. Took one of them, too.

It’s looking a lot better now, not that it will fit between the black keys. I’m proud of him for going in, and I’m proud of Kaiser for doing such a good job, not that you’ll hear that from Dave. He’s the perfect man for me. I need a man with a high tolerance for pain. I hope the swelling doesn’t go down too much.