God Should Have Quit On The Fifth Day 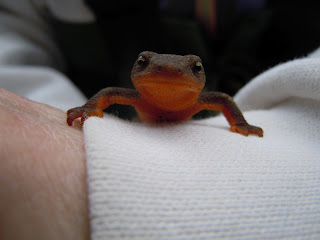 Science has been unable to pinpoint which day of the week God created man, but for sure it was after he created salamanders, which showed up mid-afternoon of the fifth day. That was a barn-burner of a day for God, and he was justifiably proud, and probably went a little manic there for a while until he got some mud and made a man out of it, and after that he had to rest up. The book says “rest up,” but really, he probably realized he needed to put the brakes on and think about what he’d done, because he’d totally overshot. It happens. Creative types frequently come up with their masterpiece early on and then spend the rest of their lives trying to replicate their success, and it never works.

“Day” is probably not meant to be taken literally, because God is more poetic than that, and bigger in general, with much longer days and a much greater imagination than us little mud-cakes he slapped out on the sixth day. So the salamander sort of worked things out on his own, with one great idea after another. There he was in the ocean, where things are constantly trying to make a snack out of him, and so he got closer and closer to shore, rolling his eyes around in alarm, until at one point there they were–his eyes–right on top of his head. Whoa! Genius. He could stay underwater where the oxygen was, and still see everything above the water. Like the land. Which, as far as he could see, contained nothing that wanted to snack on him. At that point there wasn’t much more to do but fiddle with the flippers and do some push-ups and before you knew it, the first salamander hitched up on shore, where he grew the biggest and nicest smile anyone ever had before or since, and why not? He’d gotten everything just right. Lo, he was very good. And so he took the entire kit, handsome smile and all, right through to modern times, with barely an adjustment. 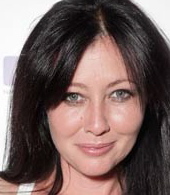 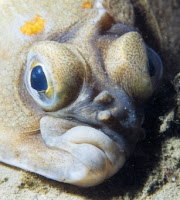 It might seem far-fetched about the eyes rolling around on the face, but it happens. Even today, flatfishes start out swimming sideways like regular fish with eyes on either side, and then one of their eyes migrates around to join the one on the other side, and then they drift to the bottom of the sea and blend in, with their eyes on top checking things out. It isn’t the Mozart Requiem but it’s still pretty cool. The eyes never look quite even, but it’s the best they can do, having traveled around the side of the fish. And so you see this sort of thing in Nature all the time: halibut. Flounder. Shannen Doherty.

When God came up with the man, he told him to have dominion over every living thing, which was a big mistake, if you’ll pardon my saying so. Sure, you’re tired, you’ve worked hard, and it’s tempting to just tell the kids to take care of everything, but that’s how you get mud tracked in the house and candy for dinner and the credit card gets run up and all the forests turn to desert and someone cranks the heat up to high so they can sit around in their underwear all winter. It’s not responsible. It’s not all bad, but you’re going to run through a hundred years of oligarchs and Republicans for every Mozart that shows up. 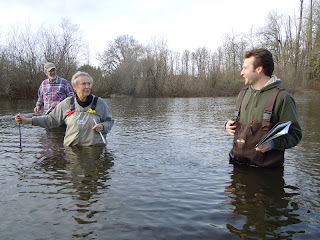 I have the good fortune to know people who do know their proper place in the world, and that place is chest-deep in a cold bog in February. Yes, the regional government Metro has sent out its intrepid Frog Warriors again this year to get a rough count of amphibian egg masses, so we can see if we’ve done a good job restoring wetlands to what God had in mind in the first place. It’s an honor and a privilege to bear witness to the single greatest feat any critter has ever accomplished, something humans couldn’t do in their wildest dreams: making new salamanders. No wonder they’re still smiling.