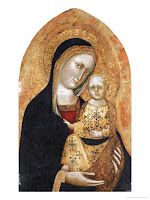 You know those old pre-Renaissance Christian paintings, with the flat faces cranked into an unnatural position, the way they posed you for your school photograph? And halos like dinner plates? Never cared much for them, but I care even less for Hindu art, which always strikes me as looking like it should have been painted on velvet and sold hanging from a cyclone fence at an intersection. I don’t get too worked up about the sacredness of any of it. I figure any currently viable gods are unlikely to look like anything we’d come up with. “When my glory passeth by, I will cover thee with my hand while I pass by; and I will take away mine hand, and thou shalt see my back parts,” the Lord said, and that’s vivid enough for me.

That doesn’t mean other people don’t get all het up about the accuracy of these things. The folks in Coeur d’Alene, Idaho recently installed some public art works including a sculpture of Ganesh, the Hindu god, and the Kootenai County Constitution Party threw a fit about it. It was a false deity, a demon god, and had no place in a land reserved for Christians, which I am told Idaho surely the hell is. 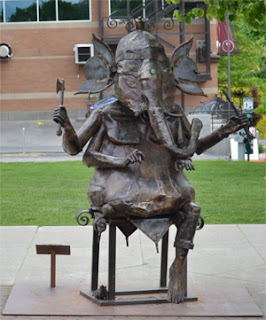 God, the genuine article, is, as we all know, an old bearded white dude in a dress. Ganesh is an elephant-headed fellow with four arms, so there’s really no mistaking the two. It seems like there are a lot of Hindu gods and goddesses, but as I understand it, they are all considered aspects of the one God, Brahman (pronounced “Al-lah”), as opposed to the pantheon of irritable wack jobs the ancient Greeks had to contend with. For instance, Ganesh, with  his big old elephant head, might be invoked when one is embarking on a new venture, because he removes obstacles from one’s path, but he’s still God. It’s as if we could worship an auxiliary Jesus operating a front-end loader: it would still be Jesus. 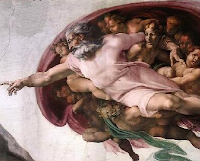 I’m interested in the way gods are envisioned in various times and places. I think people ascribe to them the attributes they would like to have, themselves. They start out assuming God looks just like them, only with improvements. The Christian god is usually depicted as an attractive white man, but bigger and floatier. The Norse god Thor was basically human, but with a really big hammer. Heh heh. If modern American women were consulted, their gods might look just like them, but about five pounds lighter. As far as the Hindu gods are concerned, many of them have more than the usual allocation of arms. So I’m assuming there’s something about India that makes you itchy.

For my money, the Greeks had the most realistic ideas about their gods. They were out there smacking each other silly and you were best off just staying out of their way. They sure weren’t looking out for you. They also had a surplus of sidekicks demanding respect, many of them inspired ensembles of several critters, including, of course, humans. The sphinx was set up with a lion’s body and a snake’s tail and wings and a woman’s head and I don’t know what-all else, but they made sure to get her titties in there, too. Then you have your minotaur and centaur, which you see rarely these days; and the half-man, half-goat items, which we still frequently elect to office. 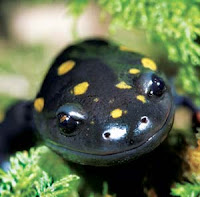 I’ve never thought about what my own god would look like, but I have given thought to my own totem pole, ever since I was a kid. These aren’t meant to be worshipped, but they include animals important to the artist. You often see ravens or eagles on top, where their outspread wings make an imposing statement; bears and other heroic sorts figure in too. But this is my pole. Clearly, my own personal totem pole would have to be crowned with a salamander head. It would make my totem pole look like a smiling thumb, but there’s no help for that. Moving on down, I like marmots a lot, but there’s really no improving on the little noodly salamander arms, so I’d have to carve them in too. Bears are cool, but they’d look really silly with the noodly arms, so I’m thinking the main part of the pole might as well be a salamander’s midsection, with more noodly legs towards the bottom. At this point finishing it off with anything other than a salamander tail would be gimmicky. There. Perfection. If you can’t see the sacred in that, you have my sympathy. 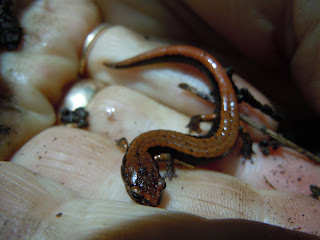