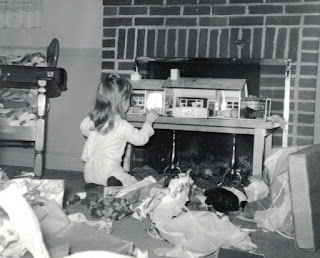 I must’ve been a Doubting Debbie early on, because I sure don’t remember being traumatized by hearing Santa Claus wasn’t actual, even though I’ve been assured by the Internet that I should have been. Apparently I’ve blanked out the entire bruising episode. It’s possible my parents didn’t hit the subject too hard to begin with. They never trotted out the bit about Santa knowing if you’re good or bad, because being bad was not presented as an option in our family, and I’d already gotten the idea that being just a little bit bad was only a matter of opinion. My opinion was that I wasn’t. I was conducting an experiment, or I was just trying to see what was inside that thing, or I had no idea who tracked that in, or I wandered away because where else is there to wander?

I don’t remember any big tragic scenes in school, either. No kids blubbering in their cubbies. I suppose existential Santa questions came up in conversation but it didn’t make much of an impression on me, as long as there were still presents coming from somewhere. And Advent calendars with all the little doors. And Life Savers in a book. And chocolate coins in gold foil. And the chaos of wrapping paper. I was fine with a good story; it didn’t have to be a documentary. Give me a good story and I’ll sail away on it. I didn’t expect to get to Narnia from my own wardrobe, either.

And I got to hear a lot of stories. Dad used to read them to me. There was an earnest pig and a clever spider. There was Mr. Toad of Toad Hall. There was an elephant’s child who got his trunk, and I know how.

Then there were all the church stories. The ark, the manger, the shepherds abiding. And of course God, who was nice like all the other Lutherans. I could go along with all that. Some of the details seemed far-fetched. Like heaven, or hell, or baptism (really? That’s the deal-breaker?), or the Trinity (why a committee?). Or a grisly execution that somehow saves us all. Mercy! All this strategizing to be able to live forever, just because we can’t bear it otherwise. And the one about God answering our prayers! Okay, I guess, as long as we can take “No” for an answer.

It must have been my nature. Lots of things I was told didn’t stick with me. I should put a sweater on. Or quit riding my bike after dark. Or save myself for marriage. There were so many stories, and I listened politely and then–according to my mother–did whatever the hell I wanted to do anyway. She didn’t say “the hell,” but it was heavily implied in her eyebrow region. 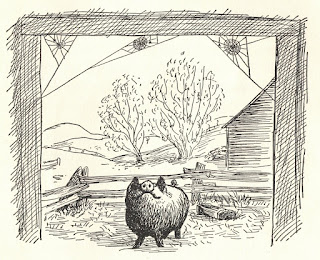 And then after a while God didn’t seem all that important either–or more to the point, the existence of God didn’t explain anything any better than the existence of Santa Claus. Of course, I was not raised with the judgmental version of either one, so there wasn’t really a penalty involved in folding them up neatly and storing them with other childhood treasures.

I still believe in Santa Claus, as much as I ever did. Santa, and Mr. Toad, and the miraculous eternity of baby spiders.