Government That Takes Care Of Shit 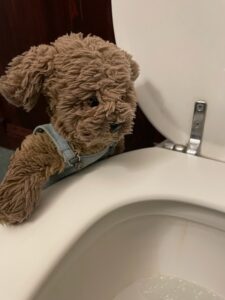 We had another sewage overflow into the river downtown the other day. We don’t get them often anymore but we had about a year of rain last week and shit happens. We were warned not to go swimming in the Willamette and they weren’t recommending plating up the fish either.

But it got me thinking about the fact that all the poop in Portland has to go somewhere and frankly I’m not sure just where that is. That’s got to be a lot of poop. I started visualizing the whole city as a sort of thin flaky crust floating over a poop pudding, and began to peer at potholes as portals to perdition. A good imagination is nice but a good sewer system is even better.

So where does it go when you go? I mean, “away” is good enough for me, but still. I don’t even want to see my own shit after it makes its break and that goes double for your-all’s.

I looked it up and basically there’s this one big sewage treatment plant for the whole dang city. Really? How does it all get there?

Well, this is another case of one of my life strategies coming through for me. I’ve learned a lot of stuff over the years and I forget it just about as fast as it goes in. It’s like my past heals over, which has its advantages, but it doesn’t brighten me up much. However, I have a wide network of friends who do know and retain all kinds of shit. And when it came to shit, I immediately thought of Katie.

Katie’s retired now but she used to work at, as she put it, the Department of Where It Goes When You Flush. I know enough not to call her when it doesn’t go anywhere—you want a plumber more than a bureaucrat there—but I called her up for this. Where does it go and how does it get there?

Good old gravity writes the ticket, mostly. But that seems almost impossible. This is a hilly town. How in the world can you design a sewage treatment plant that’s downhill from everyone? And doesn’t this mean that everything ends up at the river? Rivers and sloughs pretty much define the low spots.

In fact, all our sewage used to end up in the river until 1952. They didn’t recommend swimming then either. Although maybe you could walk across the river some days. 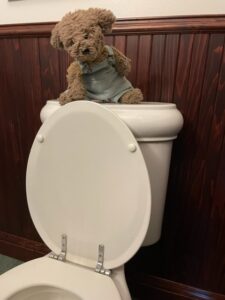 But in various places, things do get stopped up, and that’s why you need pumping stations. There’s one by the Burnside Bridge downtown and I know this because when I looked this up it was right there on the map, with a five-star rating. There was only one commenter, but he was really pumped up. “This is the very best sewage pumping station I have ever visited. I tour the country looking for municipal pumping stations, and I never miss a chance to stop at the Burnside Bridge station.” Get in line, ladies! Thank goodness they didn’t hear from frequent Yelper Skids66 who thinks the poop pump is unbearably slow and the workers are all assholes.

So all the shit meanders to the low points of the system, precisely as it does in our own bodies, and then if it hasn’t made it to the treatment plant it has to get moved uphill. In fact there are over a hundred pumping stations in the area for a little boost wherever it’s needed. The locations where it is needed become evident pretty readily, I would imagine. Once at the plant, it goes through fermentation, which should give you pause if you live in a good beer town like this one.

Katie also says the clean spiffed-up sewage water ends up in the Columbia River, but the remaining, uh, biosolids get shipped to Eastern Oregon and spread out on the grazing land. Eastern Oregon, it should be noted, is downwind of us here, and the cattle aren’t particular.

She also said—be still, my journalist heart—there is a Sewage Interpretive Center. I might have to go, as it were. My guess is social distancing would not be an issue there.

We ratepayers are still paying off a twenty-year 1.4-billion-dollar project called the Big Pipe that has durn near eliminated sewage overflows into the river. Mostly you can’t see it. It’s like spending money to shore up a house foundation instead of buying a new boat. Makes some people grumbly but even Republican poop is going into the treatment plant now. That’s about as good a sign of a civil society as I can think of.