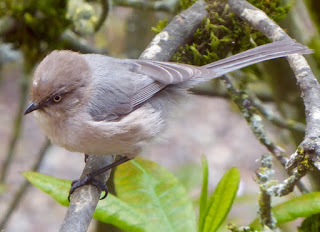 Strange times indeed. They’re marked by uncertainty, most of all, followed by a stouter appreciation of how uncertain life has been all along. What next? we ask ourselves, as we might well have asked before, if we hadn’t had so much busyness to distract us. We want a dog’s life. Specifically, we want to wag and bark and roll in shit without any sense of our mortality. Meanwhile, life keeps sending us bolts of grace and grief, all in the same fabric. 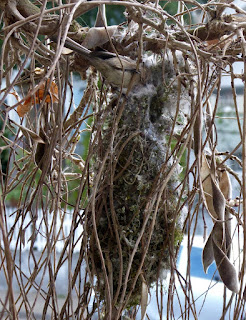 At the same time I’ve been holding my breath waiting for a friend to recover from COVID-19, I’ve felt nothing but honored that, purely by chance, I have a front row seat to the creation of a new batch of bushtits. Front row, hell–I’m sitting on the stage! Right in front of us we’ve watched over the past month as Chip and Mitzi Vinebustle have painstakingly fashioned their nest-sock out of spiderweb and moss and hustle. It was finally finished about a week ago. The flurry of activity had stopped. I thought the Vinebustles were out grocery-shopping and I got curious about their sock, so I leaned over the railing–it’s only a foot away–and brought my eye next to the entry hole at the top, and Mitzi up and blasted out of there right now. Sorry! I won’t do it again! Oh dear. Poor little button. I backed way off, of course. I’m thinking eggs have happened.

We know what comes next, and look forward to the day, coming up soon, when the nestlings hatch and the rest of the family is invited back and the whole sock fills up with bushtits. A jollier thing cannot be imagined. 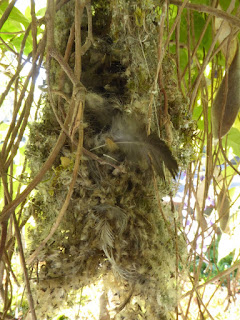 But I’ll have to keep imagining it. Because sometime in the afternoon of April 29th, something really bad happened. There is a paw-sized gash in the side of the nest sock and the bottom is ripped out. Two light brown feathers are stuck to the moss and tremble in the breeze.

It had occurred to me that the nest might be in range of a cat on our railing, and I’d had the notion to jumble chicken wire on the railing if I saw a cat stalking the Vinebustles, but I hadn’t done it. The neighbor’s cat noticed the peeping from the song sparrow nest under a shrub last year and dispatched them before I’d found something to fence it out. I don’t know why I wasn’t proactive this time around.

I have two neighbors with outdoor cats that like my garden a whole lot. It’s no wonder. Everything I do there is with my birds in mind. I plant what they like, I don’t clean up the things gone to seed until spring, I don’t rake leaves, I maintain feeders and a nest box. My neighbors would like their cats to not kill my birds. They think–well, most that can be said is they think it’s a “shame.” They also think that’s just a cat’s nature, which is true, and they also think it’s very important for their cats to be able to entertain themselves by expressing that nature. Maybe they also think it’s handier for them to poop in my tomato bed rather than a litter box. I can’t say.

In any case they do not want to upset me, but after all, there are lots of birds, aren’t there? Cats have been around forever, and there’s no shortage of birds. Right? In fact domestic cats have not been around forever, not on this continent, and birds have not evolved with them, and there is most definitely a shortage of birds. Particularly in this yard. But my neighbors have heard all that, and shrugged. 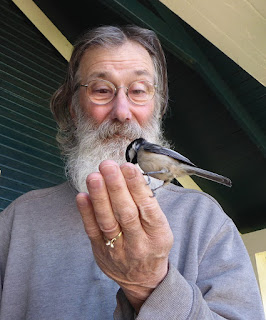 And so I want to leave any of you who still allow your cats to roam to consider at least one thing about your neighbors. Just because birds are of minor importance to you, you have no right to assume the same of me. You have no right to assume my feelings are silly or overblown. Your nonchalance about your cat has devastated me. Has stolen my sleep. And there’s still a chickadee in this yard that has single-footedly kept both Dave and me emotionally afloat in the darkest of days. Don’t tell me it’s just a bird. You’re not the authority on whom I love. It’s not your territory: you have no right. You have no idea.