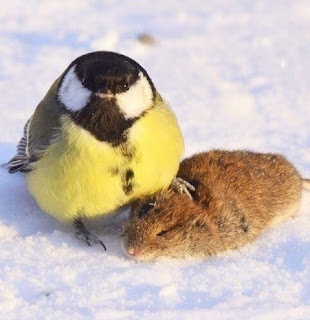 Social media have allowed us to be so familiar with each other that I sometimes get the same link sent to me by numerous people. “Salamander poop,” thirty different individuals might say. “I know who would like a picture of that!”

Recently I was multiply blessed with a link to an article featuring what at first glance appeared to be a jaundiced chickadee standing astride a wombat.
The bird in question was not, however, a chickadee, but a great tit, and it was not so much a wombat as a vole. This does not mean a great tit cannot take down a wombat but they are never in the same continent at the same time, so we have yet to observe it.
Black-capped chickadees like Marge and Studley Windowson are great tits also, maybe the greatest in many ways, but we are not to call them great tits, because that title is taken. Great tits live in Europe and are related to Cinereous Tits and Japanese Tits but not so much Turkestan Tits, although there is controversy. Ornithologists can come to blows over such things.
Coming to blows, however, is not what many people think of when they think of songbirds, preferring to consider them passive packages of good will. They are adorable, sweet-singing, and swell-hearted, we think, and not capable of the sort of predatory violence that will net them a dinner of vole brains.
That is because people generally aren’t paying attention to birds at all. Birds are not all confining themselves to striking terror in the sunflower patch. 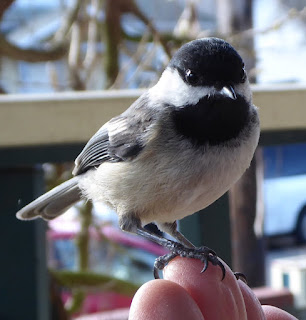 Studley Windowson, one of the greatest birds of all time, is no vegetarian. He’s delicate with seeds, withdrawing them one at a time and neatly cutting them up for himself before going in for seconds, but hand him a mealworm and he will pin the unfortunate larva down with one foot and tear off segments at the dotted line until he reaches the end.
It’s not actually known if the great tit in the photograph took down the vole by itself or if it just happened upon the carcass, but it is known that it pecked into its head for the brains. Brains are the creamy filling in the corpse Twinkie. And they’re not even that particular about whether the brain donor is dead or not. It is known that the great tit will prey on hibernating bats, always drilling through to their brains. Evidently bats sleep hard.
None of this violence should be any surprise to anyone with access to a jay. Our local scrub jays are not remotely afraid of me or anything else. They ought to lose a fight with their larger cousins the crows, but crows give them a wide berth also. They may be bigger, but they’re not psychopaths like the jays. The jays have their shivs out all the time and they’ll come at you screeching like the shower scene in Psycho. (Thanks to reader Mary Jansen, who first pointed this out, I can never hear them any other way.) They land right next to me when I’m gardening in case I turn up a larva and I always flip it to them, because I do not like the way they size up my eyeballs.
And of course you have your shrikes that not only kill frogs and mice and whatnot but spear them on a thorn to eat later and also to let the general population know who’s in charge. A rodent will never vote to impeach a shrike no matter how much evidence you pile up.
And then, Lord. The bushtits. The bushtits are very tiny members of the Tit family and plenty murderous in their own right. They may be no bigger than a fuzzy ping pong ball but they always, always travel in gangs and they will work together to flush a herd of aphids and pick off the old and lame ones. You only think they’re cute because you’re not a bug and don’t go to their meetings. 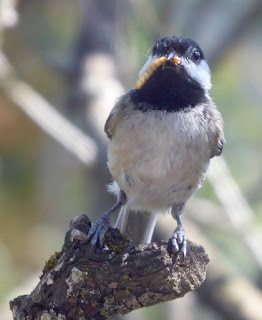 Then you have your vampire finches. They land on boobies and peck on them and drink their blood. Presumably this all started when the finches were going for mites in the boobies’ feathers and then they sort of evolutionarily got carried away. And the boobies don’t even mind. That’s how itchy they are.
Meanwhile, great tits have been known to attack the tissues of recently hanged people. This has caused me to revise my wishes for the disposal of my body. I would like to be strung up in the woods somewhere and nibbled on by chickadees. See that it happens, people.
By Murr Brewster|2021-11-09T20:08:43-08:00May 16, 2020|Uncategorized|32 Comments