I went ahead and sent my spit to a DNA company, because I feel there is such a thing as too much privacy, and also because I was curious about my genetic heritage. Lots of you have done the same thing, including some 589 close relatives of mine, which is extraordinary, inasmuch as I thought my family tree had been reduced to a stump with a few of us suckers coming out of it. (I haven’t paid the extra to be introduced to these people, because of the risk they’d be a lot like me.)

I generally describe myself as half Norwegian. Americans like to do that. We have only the single citizenship and no familiarity with other languages or cultures or anything but you ask any of your basic paler Americans what they “are” and they’ll start ticking countries off their fingers. We’re real proud of our immigrant heritage as long as it has at least a few decades of antiquity to it. So I say I’m half Norwegian because my mom’s parents were both from the old country and it was assumed their parents were too, and so on and so forth. I describe the other half as a dull mixture of pasty peoples in the English realm, but don’t get too specific. I figure they’re all interchangeable anyway. 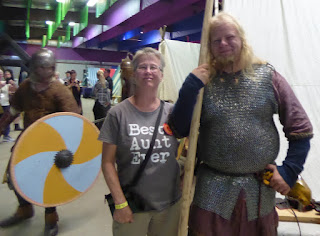 But I was surprised to discover that I actually am 43.7% Norwegian. Surprised, because this DNA business goes back a long way and it seems to me people should have moved around a bit more than that, or, in the case of the Vikings, conquered more people than that, and so I would have expected my DNA to reflect inferior vanquished overrun peoples’ DNA. Your Russian, your French, Spanish, Welsh, Irish, Greek, Italian, maybe even some Mi’kmaq from Newfoundland. Could I possibly have come from Viking stock? Oh looky there! I’m 0.4% Northern African! The Vikings conquered Morocco in 845. Boo-yah!

So I am quite tickled about the results,  because mild-mannered folk like myself like to imagine we harbor an inner Viking. Robust! Hearty! Swinging a broadsword through a cranium like it was butter! In fact–if we are what we eat–buttery! And that includes us womenfolk, with our fat blond braids tucked into our belts alongside our battle axes, ready to bash people over the head with our krumkake irons. Uff da!

All I’ve got to threaten people with is writing them into my novels.

Anyway, sure enough, the rest of the story was mixed and pasty. Until we get to the good stuff. The stuff I was most interested in. 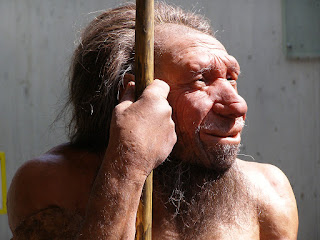 Yes, folks, read it and weep. I have way more Neanderthal in me than most of you. Nearly 4%. The reconstructions of Neanderthal skeletons are not as dreadful-looking as most people imagine, I’ll have you know. The Neanderthal is short and stocky and has thicker, denser facial bones than their skinny-ass compatriots in the H. sapiens school. I can relate. I am short and–oh, let’s substitute “sturdy” for “stocky,” why don’t we–and I have empirical evidence that my head is not fragile, because I keep falling on it, and nothing has spilled out. Between my inner Vikings and Neanderthals I’m pretty sure I could keep my smug inner Irish and English portions in line. I like to think they didn’t contribute much to the wonder that is me.