Hard Workers Never Pump Their Own 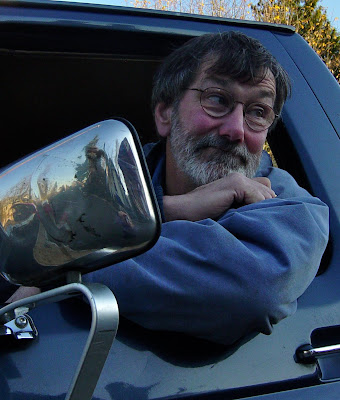 I couldn’t tell you how old I was the day it happened. I only know that I still had a good supporting cast of hormones, but my muscle tone had already started to head down the highway. I was riding my bicycle home from work, and someone was directly behind me in the bike lane for several miles, keeping pace but not passing. When I sheared off to the right, he called out, in tones that still reverberate through the winds of time, “You have a great butt!”–a little item I endeavored to work into my conversations several times over the next few weeks, until finally, in a bid for closure, someone said, “Well, you can’t put a price tag on that.” Actually, I can. I’d have put it at a good buck-forty-five anyway, and that was before I realized how rare it was. Now, what with demand regularly exceeding supply, and inflation, personal and otherwise, I’d go quite a bit more. There are days I’d empty my wallet for it.

There’s got to be a whole untapped market out there. I can’t be the only person who would be willing to fork over cold cash to someone who knows just how to make me feel really good, maybe a little tingly. It could be the basis of a whole new profession.
Dave contends it’s his job to say things like the fellow on the bicycle did, although he didn’t get all prickly about it. He can’t. He’s got a girlfriend at the gas station. He used to swing by the 76 station on his way home from work because it was the closest. Dave worked very, very hard. He’s been known to use a ninety-pound jackhammer over his head for twelve hours in a boiler at 110 degrees. He’d run through a pair of overalls and ten pairs of gloves in a week. He’d come home gashed and sooty. Sometimes he’d just burst into flame. Then he had to cook my dinner and maybe kiss my paper cuts.
The gas station is owned and operated by a Vietnamese family, and the matriarch of the crew is something special. Even I can see that. She’s not a young thing; certainly no younger than we are. She has a beautiful daughter who looks very much like her, but it is the older woman who really knows how to handle the hose. 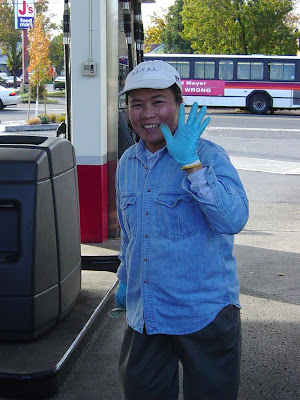 She would lean into the window, tip her head up and smile. Are those flower petals in the air? And ask what Dave wanted today. Is that music I hear? And one day, as Dave was handing over his cash, she stopped and turned Dave’s hand over and over, stroking the calloused rind on the palm side and tracing his knuckles with a delicate finger, and breathed, “Ho-aaah. You work haa-aaahd for a living.” And removed the cash, and turned her face up to his, all sweetness and cherry blossoms. Eventually Dave got the truck into gear and remembered the way home.
She’s not there every time, but as has been demonstrated with rats and pellets, random reward really pulls the lasso tight. What kind of price tag can you hang on that? The 76 station charges twenty cents more per gallon than anyone else for gas, and Dave’s been going there for ten years now.
By Murr Brewster|2021-11-09T21:31:15-08:00January 2, 2010|Uncategorized|14 Comments